England will make their third successive semi-final appearance in the Hockey World Cup. 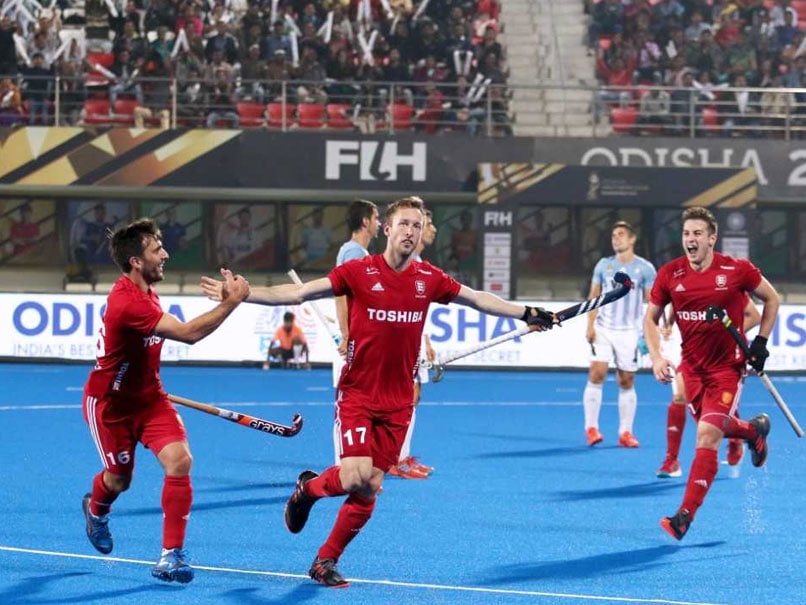 England registered a 3-2 win against Argentina in the quarter-finals.© Hockey India

Olympic champions Argentina suffered a shocking 2-3 defeat against England as they got knocked out of the 14th men's Hockey World Cup in the quarterfinals in Bhubaneswar on Wednesday. With the stunning victory against the World No.2 ranked Argentina, England became the first team to qualify for the semi-finals. In the second quarterfinal, current world champions Australia registered a comfortable 3-0 victory against 20th-ranked France to book their berth in the semis.

In the first match of the day, England, who conceded the lead in the 17th minute, staged a superb come back to make their third successive semi-final appearance in the history of the tournament.

England scored three field goals through Barry Middleton (27th minute), Will Calnan (45th) and Harry Martin (49th), while Gonzalo Peillat (17th, 48th) struck both the goals for the losers at the Kalinga Stadium.

Argentina, the bronze medallist in 2014, had themselves to blame for the defeat as they missed chances galore and got into panic mode after conceding the third goal.

Both Argentina and England were levelled 1-1 till 45th minutes but three goals in the last quarter changed the whole scenario.

Will Calnan made it 2-1 for England before Peillat drew parity in the 48th minute. But a minute later Martin shocked the Los Leones with a field strike to hand England the decisive lead.

Earlier, realising that slow pace is not helping them, England raised their tempo and that paid dividends as they earned their first penalty corner in the 11th minute.

Luke Taylor's effort from the resultant set piece earned them another penalty corner immediately but Argentina defended stoutly to keep their rivals at bay.

Argentina secured its first penalty corner in the 17th minute and drag-flick expert Peillat scored with a powerful flick to take the lead.

While Argentina players were celebrating, England almost equalised with a brisk counter-attack only for David Condon to miss a sitter.

Thereafter, the Los Leones surprisingly adopted a defensive approach and that worked in England's favour. Mark Gleghorne's fine run down from the right flank and his subsequent cross was cleared by England defenders which laid in front of an unmarked Middleton, who slotted home with a powerful shot past goalkeeper Juan Vivaldi to level the scores.

Buoyed by the equaliser, England went on the offensive but failed to get past Argentina's crowded defence.

Argentina, on the other hand, adopted a wait and watch policy to launch counter-attacks. But it was not to be as England striker Zachary Wallace made an impressive run into the Argentine circle and was brought down inside, which earned the Los Leones back-to-back penalty corners but they wasted both.

In the last quarter, Argentina equalised through Peillat's penalty corner conversion before Martin struck a minute later with a field strike to hand England the unexpected winner.

England will take on the winner of the match between Germany and Belgium while Australia will face the winner of India-Netherlands match in the semi-finals on Saturday.

Comments
Topics mentioned in this article
England Australia Hockey
Get the latest updates on ICC T20 Worldcup 2022, check out the Schedule and Live Score. Like us on Facebook or follow us on Twitter for more sports updates. You can also download the NDTV Cricket app for Android or iOS.