The contest between Australia and England remained goalless for the first three quarters before Jake Whetton scored for Australia in the 47th minute. 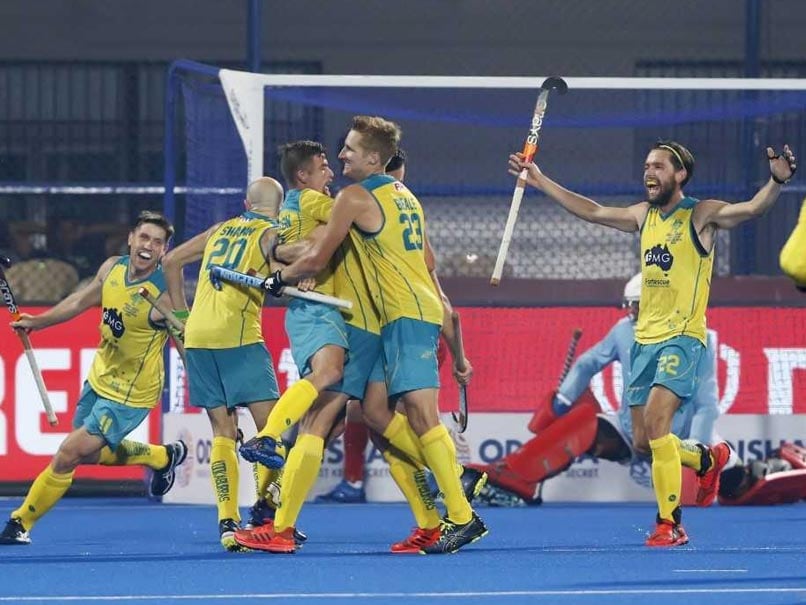 Australia currently sit at the top spot in Pool B of the Hockey World Cup.© Hockey India

Australia outclassed England 3-0 in a complete one-sided Pool B affair during the ongoing 2018 Hockey World Cup at the Kalinga stadium in Bhubaneswar on Tuesday. With this win, Australia topped their group chart with two wins from as many games and six points in their kitty, while England are at the second spot after suffering a loss and playing a draw. In the other Pool B clash, 17th-ranked China held Ireland to a 1-1 draw.

The contest between Australia and England remained goalless for the first three quarters before Jake Whetton found the back of the net in the 47th minute to put Australia ahead.

Earlier in the tournament, Australia's quest for a record hat-trick of titles started with a hard-fought 2-1 win over Ireland in the opening Pool B match on Friday. The World No.1 team were far from impressive and were made to toil by Ireland in their opener.

Ireland gave Australia a run for their money with an impressive display in both attack and defence.

England, on the other hand were held to a 2-2 draw against China in their opening match of the tournament. Making their debut in the tournament,

China scored a last-minute equaliser, stunning a higher-ranked English team. Even though England enjoyed the lion's share of the possession and created numerous chances but couldn't find a way past a resolute Chinese defence.

Australia will play their final pool match against China on December 7 while seventh ranked England will be up against Ireland on the same day.

Comments
Topics mentioned in this article
Australia England Hockey
Get the latest updates on India vs South Africa and check out  Schedule, Results and Live Score. Like us on Facebook or follow us on Twitter for more sports updates. You can also download the NDTV Cricket app for Android or iOS.