Hockey World Cup: Title Holders Australia Made To Toil In Win Over Ireland

Australia came into the Hockey World Cup 2018 as firm favourites but they were far from impressive against Ireland. 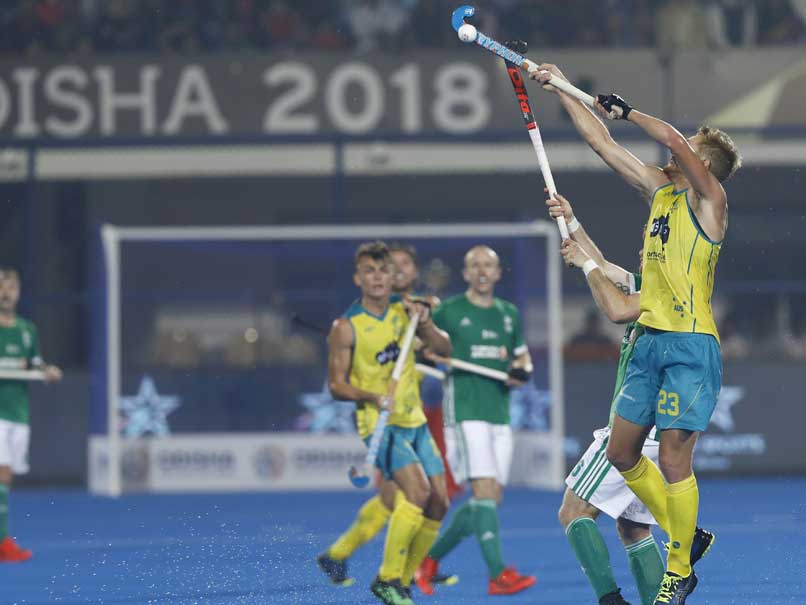 Hockey World Cup: Australia huffed and puffed their way past Ireland in the opening Pool B match.© FIH

Australia's quest for a record hat-trick of titles started with a hard-fought 2-1 win over Ireland in the opening Pool B match of the men's Hockey World Cup 2018 on Friday. Having won back-to-back World Cups in 2010 and 2014, World No.1, Australia came into the tournament as firm favourites but they were far from impressive and were made to toil by Ireland in their opener. World No.10 Ireland gave Australia a run for their money with an impressive display in both attack and defence. The Kookaburras were dismal with their penalty corners, converting just one out of five.

Ten places might separate the two teams, but the Irish fought valiantly and matched the title holders stick-for-stick in the first two quarters.

In fact, it was Ireland who had the first shot at goal. Australia goalie Andrew Charter had to come up with a double save to deny Sean Murray and then Matthew Nelson from the rebound in the fourth minute.

Australia grew in confidence as time passed and earned a penalty stroke in the 11th minute but the umpire's decision was changed to a penalty corner after Ireland asked for video referral. From the resulting penalty corner, Australia secured another penalty corner and this time Govers' flick found the back of the Irish net.

But Australia's lead lasted just two minutes as Ireland drew level when O'Donoghue scored after he was set up by Murray, who dribbled past two defenders to pass the ball to the goal scorer.

The second quarter too produced exciting hockey as both teams went on the offensive and it was Australia who came close to scoring, but Ireland captain David Harte made a fine save in front of the post to deny Dylan Wotherspoon.

Five minutes into the quarter, Ireland secured their first penalty corner and Charter came to Australia's rescue and kept out O'Donoghue's attempt.

Towards the end of the second quarter, Australia secured back-to-back penalty corners but wasted both as the two teams went into the halfway break locked at 1-1.

Australia restored their lead four minutes after the breather through Brand. Corey Weyer's workmanship in the midfield finally helped Australia when his inch-perfect through ball found Brand unmarked inside the box and the striker scored with his second attempt.

Comments
Topics mentioned in this article
Australia Hockey
Get the latest updates on ICC T20 Worldcup 2022, check out the Schedule and Live Score. Like us on Facebook or follow us on Twitter for more sports updates. You can also download the NDTV Cricket app for Android or iOS.