Johnson, a 37-year-old American, fired a final-round 65 to finish 72 holes on 16-under par 268, two strokes ahead of countryman Nick Watney, who closed with a 64, with Furyk another shot adrift after a final-round 71. 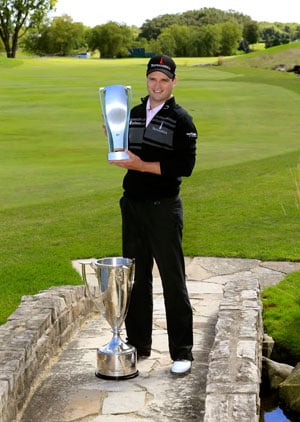 Johnson, a 37-year-old American, fired a final-round 65 to finish 72 holes on 16-under par 268, two strokes ahead of countryman Nick Watney, who closed with a 64, with Furyk another shot adrift after a final-round 71.

Johnson captured the $1.44 million top prize and his 10th career title, his first since last year's John Deere Classic, as well as giving himself a chance to win the $10 million tour playoff crown in the season-ending Tour Championship that starts Thursday in Atlanta.

"It's extremely difficult," Johnson said of the importance of his 10th win in 10 PGA seasons. "The parity on the tour and in the world is second to none. I'm just thankful it has been 10 years and hopefully many more."

Furyk botched a chance for his 16th career title and his first since winning the 2010 Tour Championship with another final-round failure, following on from last month's PGA Championship when Jason Dufner passed him to win the year's final major title.

That allowed Donald to jump from 54th to 29th in the PGA season points race and qualify for the Tour Championship.

"I knew I had to go pretty low," Donald said. "Fortunately I got it going a little bit on the back nine when I needed to."

Watney jumped from 34th to 12th with his runner-up effort to also make the field in Atlanta, with England's Lee Westwood and American Harris English bumped out.

"I knew I needed to have a good week," Watney said. "The guys ahead of me were ahead of me for a reason. They've been playing well all year. Luckily for me I kind of pulled everything together."

Furyk, who fired only the sixth 59 in US PGA Tour history on Friday to match the record-low for 18 holes, led Stricker by a stroke when they began the final round on Monday, a day late due to storms that halted play Sunday before the last 22 players in the field of 70 could tee off.

Stricker opened with a bogey to fall back, as did Woods, who began five back but was never able to make a charge for the lead.

Furyk birdied the par-4 fourth hole to stretch his lead and began the back nine with a birdie to reach 15-under, two shots in front of Johnson, who birdied the par-3 second and had back-to-back birdies at the seventh and par-5 eighth.

But when Johnson birdied the par-4 12th and Furyk took a bogey at the par-3 11th, the US duo were deadlocked atop the leaderboard at 14-under, with Watney only one stroke back.

Watney birdied the par-3 17th and closed with a par to reach the clubhouse at 14-under with a share of the lead while Furyk stumbled with a bogey at the 13th before making a birdie at the 14th to remain in the lead trio.

But Johnson birdied the par-4 16th to reach 15-under and made a 13-foot birdie putt at the 17th to grab a two-stroke lead.

Furyk found a bunker off the 16th tee, then the right rough and missed a 13-foot par putt, dropping him to 13-under and three back of Johnson. He could only muster pars on the 17th and par-5 18th and Johnson took the title.

Comments
Topics mentioned in this article
Golf Tiger Woods Jim Furyk
Get the latest Cricket news, check out the India cricket schedule, Cricket live score . Like us on Facebook or follow us on Twitter for more sports updates. You can also download the NDTV Cricket app for Android or iOS.