Tiger Woods will face Adam Scott in an intriguing match-up on the opening day of the Presidents Cup two weeks after a racial slur aimed at the American by the Australian's caddie. 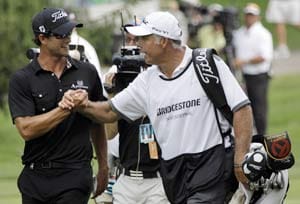 Tiger Woods will face Adam Scott in an intriguing match-up on the opening day of the Presidents Cup two weeks after a racial slur aimed at the American by the Australian's caddie.

Woods will team up with Steve Stricker for the United States while Australian Scott is playing with South Korea's K.J. Choi for the International team in the last of Thursday's six foursomes.

It means former world number one Woods will come face to face with Scott's caddie Steve Williams, who carried Woods's bags for 13 of his 14 major titles before being sacked earlier this year.

Williams earlier this month referred to Woods as a "black arsehole" during an awards dinner in Shanghai. He subsequently apologised to Woods for the comment and they shook hands.

"I think it's great for the tournament. It needed to be done," Internationals captain Greg Norman said at Wednesday's pairings announcement.

"It played out the way it played out. There wasn't any premeditation by it.

"I think at the end of the day, the guys in that last group will be the consummate professionals and go out and play the game of golf representing their International team and the US team the way they should do."

US team captain Fred Couples said the Woods-Scott face-off would be an exciting match on the opening day of the biennial teams event.

"We did not plan anything. But I think it worked out awesome for everybody involved to have Adam and Tiger play," Couples said.

"As we said all along they are still very good friends and I think it's an exciting match."

Woods, who only got into this year's Presidents Cup as the captain's pick after slipping outside the world's top 50, won four points with Stricker in the US win in 2009 in San Francisco.

The 14-time major winner, who has not won a tournament in two years and finished third at last weekend's Australian Open, was unbeaten two years ago.

That will be followed by Bill Haas and Nick Watney against Australian Geoff Ogilvy and reigning US Masters champion Charl Schwartzel of South Africa.

In foursomes each side plays one ball and players alternate hitting tee shots.

Comments
Topics mentioned in this article
Golf Bill Haas Geoff Ogilvy Aaron Baddeley Tiger Woods
Get the latest updates on IPL 2021, check out the IPL 2021 Schedule and Indian Premier League Live Score . Like us on Facebook or follow us on Twitter for more sports updates. You can also download the NDTV Cricket app for Android or iOS.