Colourful American John Daly has pulled out of the Barclays Singapore Open citing fatigue, officials said on Saturday, living up to his reputation for mid-tournament withdrawals. 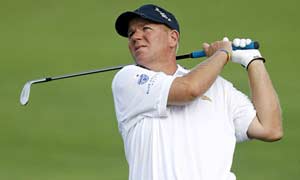 Colourful American John Daly has pulled out of the Barclays Singapore Open citing fatigue, officials said on Saturday, living up to his reputation for mid-tournament withdrawals.

"Wild Thing" Daly, whose two Major titles have been overshadowed by his turbulent personal life and years of indifferent form, was struggling at 11 over par mid-way through his second round in the rain-hit event.

Daly, playing on a sponsor's invite, shot seven-over-par 78 in his first round -- including a triple-bogey eight on 18 -- and was four over in round two, leaving him well on course to miss the cut before storms halted play on Friday.

Singapore Open organisers said Daly withdrew overnight and was now on his way to Hong Kong, where he has been invited to play next week. His manager could not immediately be reached for comment.

Last year Daly quit a tournament in Australia after hitting six shots into a lake, and in 2008 he smashed a spectator's camera on a tree during another event in the country.

In 2002, he stormed out of the Australian PGA Championship after hurling his ball and putter into a lake in a row over a penalty drop.

Daly's misadventures also include being disqualified from the 2008 Arnold Palmer Invitational for missing his pro-am tee time, a day after splitting with swing coach Butch Harmon.

Daly, 46, won the 1991 US PGA Championship and 1995 British Open but has gone eight years without a PGA Tour victory, enduring well-documented drink and marital problems along the way.

Comments
Topics mentioned in this article
Golf Jeev Milkha Singh Rahil Gangjee Saina Nehwal John Daly
Get the latest updates on India vs Australia Series, check out the India vs Australia Schedule for 2020-21 and Ind vs Aus live score . Like us on Facebook or follow us on Twitter for more sports updates. You can also download the NDTV Cricket app for Android or iOS.