Westwood out for revenge at HSBC Champions

England's Lee Westwood will be looking for a return to the form that took him to the top of the world golf rankings almost exactly a year ago when he tees off at the WGC-HSBC Champions this week. 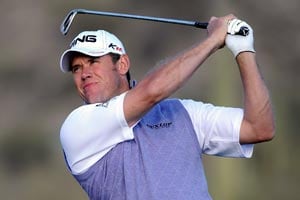 England's Lee Westwood will be looking for a return to the form that took him to the top of the world golf rankings almost exactly a year ago when he tees off at the WGC-HSBC Champions this week.

Westwood wrested the number one crown from Tiger Woods on October 31, 2010, ending the American legend's 281-week run at the head of the rankings.

A week later, he lost the HSBC Champions by one shot to Italy's Francesco Molinari in a thrilling finish and said Wednesday he was out to complete unfinished business.

"It was a good battle last year and hopefully we can get stuck in there this year and sort of go through the similar thing, but go one better."

Westwood has burnished his Asian credentials already this season, winning the Indonesia Masters and the Ballantine's Championship in South Korea.

The current world number two also finished strongly in last week's Lake Malaren Shanghai Masters, sinking a hole in one on his final round to finish fifth.

The players who finished ahead of him there -- Hunter Mahan, Noh Seung-Yul, Anthony Kim and McIlroy -- had an average age of just 24, but the evergreen 38-year-old insisted older players still had plenty to offer.

"I think that it's a game where I guess age is not such a big issue," he said. "You can obviously play well into your 40s."

McIlroy is looking to end the season on a high after a rollercoaster year which saw him throw away a four-shot lead on the last round of the US Masters before winning his first Major with an imperious display at the US Open in June.

"It has been an interesting year with a lot that has taken place. There've been incredible highs and a few very disappointing lows," said the 22-year-old world number three.

"But I think that those disappointing lows were needed to experience the incredible high of Congressional (winning the US Open)."

The past few weeks have been eventful for McIlroy: he unceremoniously dumped the agent he shared with Westwood and then bagged a $2 million winner's cheque -- billed as the biggest in golf -- at the Shanghai Masters.

But there will be no three-card-trick from the top of the rankings in Shanghai, with world number one Luke Donald missing the $7 million tournament to be at his wife's side for the birth of their second child.

The Englishman, bidding to become the first player in history to top the money lists on both sides of the Atlantic, had been hoping that the daughter they are expecting would arrive this week.

Comments
Topics mentioned in this article
Golf Roger Federer Novak Djokovic Gael Monfils Samantha Stosur Anastasia Pavlyuchenkova Maria Sharapova Francesco Molinari
Get the latest updates on India vs England Series, India vs England , live score and IPL 2021 Auction . Like us on Facebook or follow us on Twitter for more sports updates. You can also download the NDTV Cricket app for Android or iOS.