India's Gaganjeet Bhullar had two closing birdies to thank for giving him the second-round lead when play finally resumed at the weather-shortened Yeangder Tournament Players Championship on Sunday. 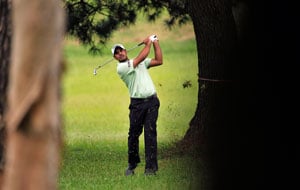 India's Gaganjeet Bhullar had two closing birdies to thank for giving him the second-round lead when play finally resumed at the weather-shortened Yeangder Tournament Players Championship on Sunday.

The 24-year-old Indian battled to a three-under-par 69 to take a slender advantage over 14-time Asian Tour winner Thaworn Wiratchant of Thailand.

Bhullar has compiled a two-day total of nine-under-par 135 at the Linkou International Golf and Country Club in Taipei.

Thaworn took second place when he signed for the round's lowest score of 66 to pile the pressure on Bhullar, while Berry Henson and Jason Knutzon of the United States returned with a 68 and 71 respectively to share third.

Starting the day in equal second, Bhullar got off to a commanding start with an opening birdie, followed by an eagle on the fifth hole. He dropped a shot on the seventh before reaching the turn with a three-shot lead over the chasing pack.

Bhullar appeared to be cruising after marking his card with another birdie on the 10th hole.

However, a double-bogey six on the 14th led to some anxious moments for the two-time Asian Tour winner.

"I hit it to the right of the woods and laid it up short of the green. The lie was too fluffy and my club just went underneath. I was four-on and then I had like a five-footer to save five but I missed that," Bhullar told the Asian Tour.

Two birdies on the 17th and 18th holes however changed the complexion of his round.

"Trust me, the last two birdies were definitely much-needed to ease the pressure. I played well today considering the last two days I was just sitting in my room and couldn't do anything," said Bhullar, who remains wary of the lurking Thaworn.

"The final 18 is going to be interesting as it has been a long time since I last played with Thaworn," said Bhullar.

Scores after round 2 of the Yeangder TPC (par 72)

Comments
Topics mentioned in this article
Golf Kunal Bhasin Gaganjeet Bhullar Thaworn Wiratchant
Get the latest Cricket news, check out the India cricket schedule, Cricket live score . Like us on Facebook or follow us on Twitter for more sports updates. You can also download the NDTV Cricket app for Android or iOS.