Yani Tseng has already worked on her leap at her pool back home in Orlando, trying to come up with something special for that airborne moment between winning the LPGA Tour's Kraft Nabisco Championship and splashing down in Poppie's Pond for the traditional post-tournament dip. 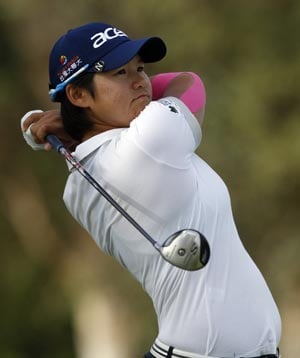 Yani Tseng has already worked on her leap at her pool back home in Orlando, trying to come up with something special for that airborne moment between winning the LPGA Tour's Kraft Nabisco Championship and splashing down in Poppie's Pond for the traditional post-tournament dip.

"I thought I jumped pretty cool two years ago, but my friends say it wasn't a good jump," said Tseng, the 2010 winner. "I think maybe if I have a lead on the last hole, I can (be) thinking what's the best pose for me to jump, some little crazy move ... like you jump in the pool, but you feel you're relaxed. Something like that."

Nobody doubts the 23-year-old Tseng has a very good chance of making that leap.

She's already soaring over the rest of women's golf, winning four of the last eight majors and ascending to No. 1 in the world. Tseng has won two straight tournaments, three of five this season - more than doubling second-place Ai Miyazato on the money list with $792,186 already - and six of 12 LPGA Tour events dating to last season.

But 48 of the world's other top 50 players have gathered at Mission Hills' Dinah Shore Tournament Course in the Palm Springs area in an attempt to slow Tseng's roll in the first major of the LPGA Tour season.

"There's a reason I have a pool at home, too," Norway's Suzann Pettersen said.

Stacy Lewis' three-stroke victory over Tseng last year in the Kraft Nabisco proved the Taiwanese star is beatable, even down the back stretch of a major. Lewis began Sunday two strokes behind Tseng, but passed her around the turn before Tseng bogeyed two of the final three holes at Mission Hills. Lewis earned her first LPGA Tour victory, while Tseng was crushed.

"It took me a couple of weeks to go through that, because I was crying after the round, even after a couple of days," Tseng said.

Lewis' comeback is good news for the rest of women's golf, but Tseng channeled her resentment from that loss into her current streak of dominance. After falling short in Rancho Mirage, she reached even greater heights - including the brink of Hall of Fame eligibility before she's old enough to rent most cars.

"That experience gave me lots of things, and improved myself," Tseng said. "I know my emotional control wasn't very good. I was very stressed after I missed a putt, after I made a bad shot. After that tournament, I had a little meeting with my team, my trainer, to see how much I can improve on the tournament."

Lewis rode the momentum from her victory to a fourth-place finish on the money list in her breakthrough season. She revisited the Mission Hills course earlier Wednesday, checking out the spots where she made the decisive putts during a final round that went by in a blur.

"It gave me so much confidence that I could play against the best players in the world," Lewis said. "Just to hang with Yani like I did for two days, I don't think there's many people that can say that they've done that. If you're not nervous, I think you're not human or something.

"I want to come into a tournament with people expecting me to win and play well. I love this golf course. I think it really sets up well for me, and so I want people to write that and I want people to know that, because I feel like I can tee it up with her and contend with her."

The field also includes Michelle Wie, who will graduate from Stanford in June after getting her final grades Tuesday. The former child prodigy who chose college over the tour grind is finally dedicating her life to golf this spring, relocating to Jupiter, Fla., and channeling all of her energy into realizing her still-enormous potential.

"I played in my first Kraft nine years ago," said Wie, who is about nine months younger than Tseng. "It's absolutely ridiculous to think about that... I'm more than ready just to jump in, full speed ahead, with golf, (but) I'm so glad I (went to Stanford). I think I would have regretted it for the rest of my life, and I'm so happy with my choice."

Tseng and Lewis are the last two players to make the celebratory leap into Poppie's Pond, a small freshwater body near the 18th green. The tradition started in 1988 with Amy Alcott's spontaneous celebration, and every winner since has jumped or at least waded into the water.

The celebration turned a bit ugly last year when Carol Lewis, Jenny's mother, hurt her leg while leaping with her husband and two daughters. Carol Lewis, an accomplished runner, thought she had broken her leg, though it turned out to be a badly sprained ankle.

But with Tseng back home in Florida practicing for her leap, even Poppie's Pond got a makeover for the 41st edition of the erstwhile Dinah Shore tournament this year. The sloping ledge that could cause injuries has been removed, giving a clearer path to a big splash.

"Good, so now we have more space to cannonball," said Morgan Pressel, who won her only major here in 2007. "That's exciting."

Comments
Topics mentioned in this article
Yani Tseng Amy Yang Golf Michelle Wie
Get the latest updates on SA vs IND 2021-22, check out the Schedule and Live Score . Like us on Facebook or follow us on Twitter for more sports updates. You can also download the NDTV Cricket app for Android or iOS.