Woods won the Jack Nicklaus Award for the 11th time in his career on the back of his five big wins and return to No. 1 in the world this year. 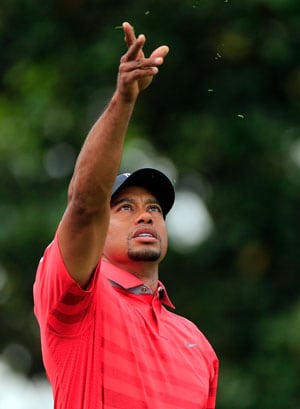 Tiger Woods was voted U.S. PGA Tour player of the year for the 11th time on the strength of his five big wins and return to No. 1 in the world.

It was the third time Woods won the Jack Nicklaus Award despite not winning a major. He made up for that with two World Golf Championships and The Players Championship among his five wins. No one else won more than twice this year, and Woods won the Vardon Trophy for lowest scoring average and the tour money title.

"It's been an incredible year to have won five times, two of those World Golf Championships and one Players," Woods said on a conference call on Friday. "It's been just a fantastic year all around. It's also an incredible feeling to be voted by your peers, and to have that type of respect is something that's very humbling."

The tour does not release the percentage of votes won or even who finished second.

Jordan Spieth was voted rookie of the year in a race that likely was no contest. The 20-year-old Texan began the year with no status on any tour. He won the John Deere Classic, lost in a playoff at another event, reached the Tour Championship, was chosen for the Presidents Cup team and wound up 10th on the money list with nearly $4 million.

He will be the youngest American - and first tour rookie - to play in the Presidents Cup next week in Ohio.

"I don't know if it's a 'pinch me' moment yet," Spieth said. "I think my mind is still really on next week."

Woods was on the ballot with British Open champion Phil Mickelson, Masters champion Adam Scott, FedEx Cup champion Henrik Stenson and Matt Kuchar. Mickelson also won the Phoenix Open and was runner-up in the U.S. Open for the sixth time. Along with his first major, Scott won The Barclays. If either of them had won the Tour Championship, three wins and a major might have won some votes over five big wins and no majors.

Mickelson, with more wins (42) and majors (five) than any player except for Woods dating to the Tom Watson generation, has never been tour player of the year, No. 1 in the world ranking or won a tour money title.

Woods nearly made it a clean sweep of all the awards. Steve Stricker narrowly beat him out for the Byron Nelson Award with a 65 on the final day at East Lake in the Tour Championship. That award is for lowest scoring average, though it is not as prestigious as the Vardon Trophy from the PGA of America. The Vardon Trophy dates to 1937 and requires 60 rounds (instead of 50 for the PGA Tour's version of the award) with no incomplete rounds.

It was the first time since 2009, right before his personal life unraveled, that Woods won these awards. Even though he has more of them than anyone in history, he said that it doesn't get old.

"I know how hard it is," Woods said. "I've had to work my way back from injuries on numerous occasions throughout the years. These last couple years are no exception to that. There were a lot of people saying I could never win again, and two years later I've got eight wins on our tour. I'm very proud of where I've come from, from being ranked outside the top 50 to being ranked where I am now, and to have had the success that I've had this year just makes it all the more rewarding."

He said his biggest win this year was at The Players Championship, mainly because it's the one golf course he plays regularly that has given him fits. His other wins this year came on courses where he won for at least the fourth time.

"You start playing golf courses that you like and that suit your game," Woods said. "Guys generally play that schedule and give themselves the best opportunity to win tournaments and to have a nice living out on tour. For me, The Players Championship is the big event and against probably the strongest field we play all year. I haven't had a lot of success since 2001.

"To finally put myself there with the chance and the way I was hitting it to get it done on that Sunday, boy, it sure felt good."

Woods and Spieth won two different awards, though both pointed to the area of improvement - the majors. Woods has been stuck on 14 majors since 2008, though he had a chance in the final round this year at the British Open. Spieth missed the cut at the U.S. Open and U.S. PGA Championship and tied for 44th in the British Open.

"I think next year I'm really going to focus on those," said Spieth, who is No. 21 in the world. "Maybe build a schedule or game plan around how to have success and maybe compete at those four events, and I think that would be a better year for me."

Comments
Topics mentioned in this article
Golf Tiger Woods Matt Kuchar Phil Mickelson Webb Simpson Jordan Spieth Henrik Stenson
Get the latest Cricket news, check out the India cricket schedule, Cricket live score . Like us on Facebook or follow us on Twitter for more sports updates. You can also download the NDTV Cricket app for Android or iOS.