World number one Woods edged 41st-ranked Richard Sterne of South Africa 1 up to secure the trophy, boosting the Americans to 8-1-1 in the overall rivalry with their fifth win in a row. 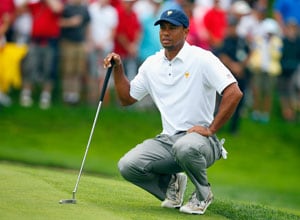 Tiger Woods clinched the Presidents Cup for the third time in a row on Sunday, leading the Americans to an 18 1/2-15 1/2 victory over the Internationals at rain-soaked Muirfield Village.

World number one Woods edged 41st-ranked Richard Sterne of South Africa 1 up to secure the trophy, thwarting an Internationals fightback and boosting the Americans to 8-1-1 in the overall rivalry with their fifth win in a row.

"It feels good," Woods said. "It was a tough day, tough conditions, rain, wind all around. It was a long week, but it was worth it."

Battling nagging back spasms over the final five holes, 14-time major winner Woods won the par-3 16th with a par, chipped from the rough to inches from the hole at 17 and halved 18 for the victory.

"(My back) went out on me at 14 and from then on it just kept getting worse. We played a lot of holes the last couple days so a lot of our guys are dinged up and unfortunately I was one of them."

Woods is a five-time winner of the US PGA Memorial tournament, which is played at Muirfield Village, and he went 4-1 in Cup matches, improving his overall singles record in Ryder and Presidents Cup to 10-3-2.

His victory put the hosts up by four with only two matches remaining on a course that saw heavy rain for the fourth day in a row, forcing lift, clean and place rules to be used.

"We've all slogged it out and did our best," said 2013 Masters champion Adam Scott of Australia.

It was the third triumph for Fred Couples as the US captain, all having ended Woods taking the winning point.

"Three in a row and Tiger has the winning point all three times -- that's pretty good," Couples said.

Couples is not planning to guide the team again in 2015 when the event will be played in South Korea.

"A three-peat is good enough for me," Couples said.

Internationals captain Nick Price was proud of his team's rally, winning four matches in a row with the US on the brink of clinching to create some late drama.

"We're a real hodgepodge team that came from the four corners of the world and gave the might of America a run for their money," Price said.

"The all played incredibly well. They tried their hardest and I'm proud to be their captain."

Aussie Jason Day won the first singles point 6 and 4 over Brandt Snedeker. The Muirfield Village member won four of the first six holes and led all the way.

Hunter Mahan answered for the hosts, beating Japan's Hideki Matsuyama 3 and 2. Mahan birdied six and seven to take the lead for good and prevent an Internationals run.

Jason Dufner, who won the PGA Championship two months ago, edged the US closer by beating Zimbabwe's Brendon de Jonge 4 and 3.

Dufner led from start to finish and won after de Jonge hit his tee shot way left into trees at the par-5 15th.

Canada's Graham DeLaet chipped in from a bunker at the 18th hole to beat Jordan Spieth 1-up.

Zach Johnson beat South African Branden Grace 4 and 2 to put the US on the brink of victory.

The tension increased as Aussie Marc Leishman made a 10-foot par putt at 18 to edge Matt Kuchar 1-up and South African Charl Schwartzel beat Keegan Bradley 2 and 1 before Woods ended the drama.

Webb Simpson led for 16 of 17 holes but gave South African Louis Oosthuizen the last to halve their match and Phil Mickelson gave Argentina's Angel Cabrera the last putt, hole and the match 1-up to create the final margin.

The US team won 2 1/2 key points in foursomes matches that ended Sunday morning.