Thongchai Jaidee moves up to 59th in world rankings, qualifies for US Open 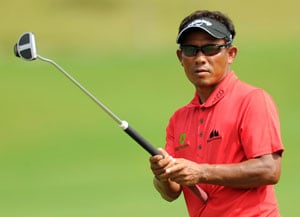 Thai star Thongchai Jaidee's fourth place finish at the CIMB Niaga Indonesian Masters golf over the weekend has propelled him to 59th position on the latest Official World Golf Ranking which puts him in line for a third appearance at the next month's US Open.

The evergreen Thai, a record three-time Asian Tour No.1, contended at the Royale Jakarta Golf Club throughout the week before settling for his sixth top-10 of the season.

The 43-year-old Thongchai made his Major debut at the U.S. Open in 2001 where he finished tied 74th. It was also the same season when he became the Asian No.1 for the first time in his career. Thongchai subsequently qualified for the 2010 edition, finishing equal 47th but has not featured in the US Open since.

Sunday's outing was Thongchai's third consecutive top-10 which has also pushed him to become the highest ranked Asian in the world. Austria's Bernd Wiesberger jumped 13 rungs to 70th after winning the CIMB Niaga Indonesian Masters.

In the latest rankings, a total of 14 Asian Tour members are featured in the world's top-200.

Thai ace Kiradech Aphibarnrat, who is leading the Asian Tour's Order of Merit, is ranked 85th followed by Korea's K.J. Choi who is three rungs below.

The Official World Golf Ranking will also be used to determine the field when golf makes a return into the Olympic Games in Rio de Janeiro in 2016.