Tiger Woods looked menacing as he had two birdies in the first five holes, to get to three under, but he failed to capitalise on that with bogeys at the eighth and 11th, his putter letting him down on both occasions. The world number one stayed at one under through 16 holes. 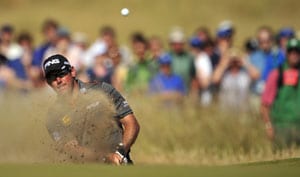 Lee Westwood put himself in prime position for a tilt at The Open crown at Muirfield on Friday with a second round of 68.

The English former world number one, who has played in 61 majors and has yet to win one, could have been even more handily placed as he got to five under for the tournament after six birdies in 12 holes.

That put him level with overnight leader Zach Johnson, who had a mid-afternoon tee-time.

Bogeys at 13, 14 and 18, stopped his charge, but he had still taken the joint lead in the clubhouse and worked his way back into championship contention.

The sun was shining brightly on the famed East Lothian links once again, but with the greens having been watered overnight and a change in wind direction from east to west, the course was less of a fiery beast.

Still, with the wind starting to pick up in late morning there was a chance for the early starters to take advantage of the favourable conditions.

Tiger Woods looked menacing as he had two birdies in the first five holes, to get to three under, but he failed to capitalise on that with bogeys at the eighth and 11th, his putter letting him down on both occasions.

The world number one stayed at one under through 16 holes.

Sweden's Henrik Stenson carded a second straight 70 to join Westwood at two under 140, with Scottish home hope Martin Laird a stroke further back after he finished on level par.

"I'm taking all my hits on the chin and just moving on," said Stenson, who is climbing back up the world rankings after a disappointing last two years.

"That's kind of the mindset you have to have at these events. You know it's going to be tough. And sometimes you might not feel like it's fair, but we're all playing the same course and you've got to keep on going forward is the way, not backwards."

Last year's Masters champion Charl Schwartzel, who smashed a club in anger on Thursday, had the joint best round among the early starters, coming in with a superb 68 to move to one over.

Spanish veteran Miguel Angel Jimenez moved to four under with a birdie at the second, taking him level with compatriot Rafael Cabrera-Bello, who opened with three straight pars.

But both bogeyed the fourth to fall back to three under.

Two-time Open champion Padraig Harrington, who was left hanging on the cut fringe at six over, said that Muirfield was a tamer prospect on Friday than it had been the previous day.

"The conditions were a lot easier today. I don't know if the course is playing easier but the greens are obviously a lot slower and holding a lot more. And it wasn't as fiery," he said.

Unlike Harrington, England's former world number one Luke Donald knew that he could pack his bags and head for home right away after a 72 left him at 10 over for the tournament.

Australia's Masters champion Adam Scott was safe for the weekend on one over after a 73.

Phil Mickelson (69), Justin Rose (75) and defending champion Ernie Els (74) all had afternoon tee-times as did Rory McIlroy, who was looking to bounce back after a crippling opening round of 79.

Comments
Topics mentioned in this article
Golf Tiger Woods Lee Westwood Zach Johnson Rory McIlroy Shiv Kapur Phil Mickelson Rafael Cabrera-Bello
Get the latest Cricket news, check out the India cricket schedule, Cricket live score . Like us on Facebook or follow us on Twitter for more sports updates. You can also download the NDTV Cricket app for Android or iOS.