Lee Westwood fired a 70 for a three-under total of 210 to lead by two from Tiger Woods, who had a 72, and Hunter Mahan, who had a 68, equalling the best round of the day at the British Open. 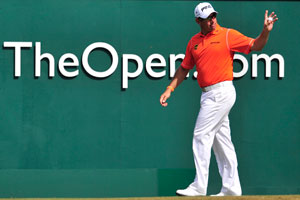 Lee Westwood will take a two-stroke lead into Sunday's climax to the British Open after he and Tiger Woods duelled for the lead throughout Saturday's third round.

Playing together in the penultimate pairing, they both quickly sped past overnight leader Miguel Angel Jimenez of Spain and then went head-to-head over the mighty Muirfield links on another sun-drenched afternoon.

At the end of it, 40-year-old Englishman Westwood was the winner thanks to a pivotal 17th hole when he birdied, while Woods bogeyed for a two-stroke swing.

Hunter Mahan of the United States was the only other player to stay under par, by the smallest of margins, thanks to a 68 and he will go out with Westwood in the final pairing on Sunday.

Woods will partner Masters champion Adam Scott of Australia, who was alone on level par after a 70.

On a day of fluctuating fortunes, the best golfers in the world again grappled with the deep pot bunkers, bouncy fairways and super-fast greens that are the mark of the famed East Lothian links.

Some succeeded and will contest for golf's supreme title on Sunday, others failed and will make up the numbers in the final round.

At the start of the day Jimenez of Spain was leading by one with a quartet of Woods, Westwood, Henrik Stenson and Dustin Johnson breathing hotly down his neck.

In the space of two holes Woods was ahead thanks to a 18-foot birdie putt followed by a missed four-footer from Jimenez minutes later.

Westwood then went on a charge, sinking a monster putt for eagle from the edge of the fifth green and adding a birdie at the seventh to lead by three.

But he bogeyed the next two holes, and he and Woods made the turn tied at two under.

Westwood nudged ahead again thanks to a majestic mid-iron approach shot to six feet at the 14th, but a wayward four-iron at the par-three 16th saw the duo back level again.

The final twist came at the par-five 17th where Woods bunkered his second and took a bogey while Westwood chipped and single-putted for a birdie and a two-stroke swing.

If the record books are anything to go by that could be a fatal blow to Woods who has never won a major when trailing going into the final round.

For Westwood it will be the chance to finally win a major trophy at the 62nd time of asking and he would be the first Englishman to win The Open since Nick Faldo did so at Muirfield 21 years ago.

Finishing the day at one over par was a quartet of Swede Henrik Stenson (74), Angel Cabrera of Argentina (73), and Americans Zach Johnson (73) and Ryan Moore (72).

Still well in contention were four-time major winner Phil Mickelson, who had a 72 to stand at two over, level with Francesco Molinari (72), with Sergio Garcia (68), Brandt Snedeker (69) and Jason Day (72) among those perched on three over.

Defending champion Ernie Els had a 70 to get to five over.