Anticipation for a second day Woods charge was palpable even on the first tee. The mood there was especially tense following the world number one's disastrous opening shot on Thursday, when he fired it deep into the rough and had to declare an unplayable. 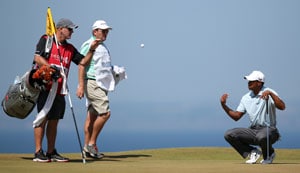 Some came dressed as tigers, others peered over walls from outside the course, most packed the stands and lined the fairways. There was only one man they had come to see.

Tiger Woods may not be the player he once was but when he is in the hunt at a major, he remains, by far, the biggest draw.

"We're supporting him because he is the best player in the world," Craig Brown, 28, told AFP. "I'm absolutely roasting," said his companion, Jamie Gallacher, 24.

Both were dressed as tigers and beginning to regret it as Muirfield and the British Open crowds sweltered in a rare Scottish heatwave.

Woods kept his cool on Thursday, escaping from some uncomfortable spots to finish with a highly competitive two under par score, three off the overnight lead held by fellow American Zach Johnson.

Anticipation for a second day Woods charge was palpable even on the first tee. The mood there was especially tense following the world number one's disastrous opening shot on Thursday, when he fired it deep into the rough and had to declare an unplayable.

The three wood stayed in the bag this time and there was relieved applause when he found the middle of the fairway.

His approach, though, came up short and he ended up faced with a nasty looking 10-foot par putt.

Woods lined it up from every angle before standing over it for what seemed like an eternity. The trademark wipe of the putter face on the inside of the right leg meant his stroke was imminent.

"Yes!" the crowd shouted as one. Woods has started as he left off on the opening day: scrambling like a champion.

He takes the iron again off the tee on the second and finds another nice spot on the fairway.

Half a dozen enterprising souls without tickets have found a wonderful vantage point and are peering from behind a wall right by the green, arms resting on the ancient stone.

Back on the course, Woods has left himself what looks like a good chance at birdie. The putt though turns out to be a big left-to-right swinger and it slipped agonisingly past the hole. The crowd moaned.

By the time Woods reaches the third green, where he left himself another birdie try, his personal gallery had swollen to several thousand.

Course marshals death stared anybody who so much as moved and you could hear a pin drop as Woods rolled it confidently into the hole.

"Yeah!" the cheers came as one. Tiger is in the hunt. "Come on Tiger! Go on Tiger," plucky individuals shouted as he strode confidently to the fourth tee. But the greens at Muirfield are deathly quick and the course gets it revenge at the next as Woods misses a short par saver.

"Unreal," a spectator barked, interrupting the collective sigh of hundreds of Woods fans.

Unhappy more like. Woods spat as he left the green, a subtle tidy spit. The three-putt had left a bad taste in his mouth.

Showing the same kind of steel as he had throughout Thursday's round, Woods hit two strong shots down the par five fifth leaving himself a long-range eagle try.

It just slid by but Woods was all smiles as he flung the ball to his caddie for the cursory clean before tapping in to get back to three under.

A shot went on the eighth as Woods missed another four footer but he saved par on the 10th by draining a putt that was easily twice as long.

Woods was certainly wrestling with the course and slipped to one under on the 12th as his chip ran too far past.

Comments
Topics mentioned in this article
Golf Phil Mickelson Shiv Kapur Zach Johnson Lee Westwood Rory McIlroy Tiger Woods
Get the latest Cricket news, check out the India cricket schedule, Cricket live score . Like us on Facebook or follow us on Twitter for more sports updates. You can also download the NDTV Cricket app for Android or iOS.