Defending champion Gaganjeet Bhullar bounced back with a 69 for tied ninth. The Indian stands a chance to qualify for the WGC-HSBC Champions in China in October if he can remain in top-2 on the Order of Merit before the cut-off date October 14. 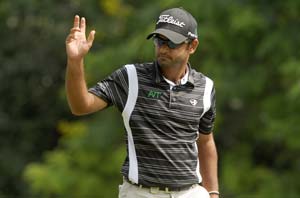 Thai golfer Thaworn Wiratchant showcased his short-game prowess when he seized the second round lead with a five-under-par 67 at the USD 500,000 Tournament Players Championship (TPC) in Taipei on Friday.

Thaworn, the reigning Asian Tour Order of Merit winner, overcame his poor iron shots with a master class display around the greens at the Linkou International Golf and Country Club. He leads by one-shot on eight-under-par 136 from Asian Development Tour (ADT) graduate Hsu Mong-nan (68) of Chinese Taipei and India's Chiragh Kumar (in pic), who battled to a 69 despite struggling with flu.

Asian Tour Qualifying School winner Chan Kim of the United States carded a flawless 68 to sit in fourth on 138 while Tim Stewart of Australia was a further shot back. Overnight leader Thitiphun Chuayprakong of Thailand slipped down the leaderboard to tied ninth after shooting a disappointing 76.

Thaworn, winner of the 2010 edition, sank a 10-foot eagle putt on the first hole and continued to soar with an impeccable short-game which earned the admiration from playing partner Jonathan Moore of the United States, who shot a disappointing 75.

"I hit about four greens but I was saved by my chipping and putting. There hasn't been any rain lately so the greens are hard. Some players find it hard to play here but I like playing on this course. I won't say that I have a good chance to win yet because my irons are not where I want it to be," said the 46-year-old Thaworn, who holds an unprecedented 15 Asian Tour titles.

Kumar, who has been struggling with flu since Day 1, fuelled his ambitions of winning a first Asian Tour title with a solid 69. The Indian was delighted to rediscover some of his best form after struggling with an ankle injury last season.

"I just hope to continue my form. I'm going back to rest now because I don't have any energy to practice. My ankle is alright now but hopefully the pain won't come back," said Kumar, who rose to prominence when he finished second at the 2011 Indian Open.

Defending champion Gaganjeet Bhullar bounced back with a 69 for tied ninth. The Indian stands a chance to qualify for the WGC-HSBC Champions in China in October if he can remain in top-2 on the Order of Merit before the cut-off date Oct 14.

The halfway cut at the TPC was set at four-over-par 148 with a total of 77 players advancing into the weekend rounds.

Sunil Narine Says "India Is Like My Second Home"
Advertisement