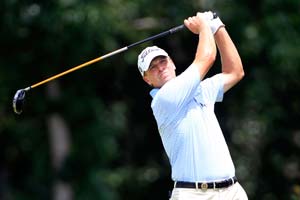 Snedeker was chosen for his first Ryder Cup because of his stellar putting touch in the past month.

"We need hot putters," Love said. "There really hasn't been a better putter since the British Open."

The Americans will face holders Europe in the 39th edition of the biennial team golf matches on September 28-30 at Medinah near Chicago.

"I look forward to getting to Medinah and trying to make Davis look like he is a genius," Snedeker said.

"I think we have a great team," Love said. "We're extremely deep this time, deeper than we have ever been.

"There were a lot of guys who played a lot of good golf. It was tough to leave anybody off. It was a tough call for me."

Hunter Mahan, a two-time US PGA winner this year who has struggled in recent months, was not selected for the squad.

Furyk, making his eighth Ryder Cup start, and Stricker, another US veteran of team events, were joined by Dustin Johnson, who made his second Ryder Cup squad.

"I'm really looking forward to playing one on US soil," Dustin Johnson said.

Love said he was counting on veteran leadership from Stricker on and off the course.

"We all know how much fun it is and how much pride it takes to be part of this team," Stricker said. "It will be exciting to play for Davis. It will be tremendous to get together for that one common goal and get that Cup back."

Comments
Topics mentioned in this article
Golf Steve Stricker Jim Furyk Brandt Snedeker
Get the latest Cricket news, check out the India cricket schedule, Cricket live score . Like us on Facebook or follow us on Twitter for more sports updates. You can also download the NDTV Cricket app for Android or iOS.