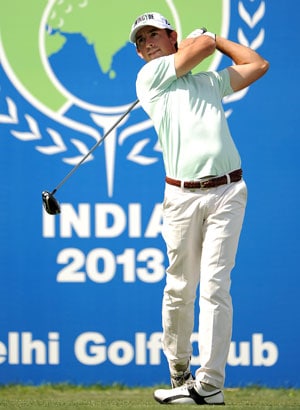 India's SSP Chowrasia was lying at third position after he shot a second straight 69 to be six-under at the end of the second day at Panasonic Open India in New Delhi on Friday.

Australian Wade Ormsby, seeking his first professional title, added a second straight 67 to move to 10-under 134, while Lam Chih-bing had a bogey-bogey finish to drop from 10-under to eight-under to be at second place at the Delhi Golf Club, which is playing uncharacteristically tough with swirling winds making the scoring conditions difficult.

Chowrasia, India's two-time winner on Asian and European Tours, is now four behind the leader. Placed along with the Indian is seasoned 56-year-old Thai Boonchu Ruangkit, who added a four-under 68 to his first round 70.

The cut fell at five-over, one of the highest in recent memory, and 68 players including 32 Indians made the weekend rounds.

The second best Indian Shiv Kapur (71-68) may well have been higher than his fifth place, but for a double bogey on the sixth, his 15th hole, while the steady Digvijay Singh (71-71) was tied seventh alongside five others, including youngsters S Chikkrangappa, who shot a flawless 70, and Amardip Sinh Malik (71-71).

Chowrasia, not getting ahead of himself, said, "I played fairly well in the conditions and two successive three-under rounds is quite alright in these conditions, which are more difficult that normal. I had four birdies, all from short distances and one bogey on the 12th, where my 5-Iron got stuck in the bank of the bunker. I had to chip out and took a bogey.

When asked about the conditions, he said, "It was quite windy and with the directions and speed changing, so it became challenging at tough at times. I am happy with my position and taking things as they come."

Speaking of his round, Chowrasia said, "The good thing was I got birdies on three of the four par-fives. On the 14th, the 18th and the eighth. My other birdie came on par-3 fifth. I was also happy with a couple of good par saves on sixth and ninth. That kind of a save also gives you confidence."

A year ago when Ormsby came to the Panasonic Open after earning his card through the Qualifying School, he finished tied 10th and he had another top-10 at the CIMB Niaga Indonesian Masters.

Ormsby, 33, played his first full season in Europe in 204 and thereafter kept losing his card but also kept getting it back via the Qualifying School. He also played the Nationwide Tour, the second rung Tour in US in 2008, and then finally found his calling on Asian Tour.

"It was a tough day out there today and I'm really happy with my round. I had to fight pretty hard on my back-nine which was tricky as I lost my rhythm a bit like most of the guys out there today," said Ormsby after the round.

Lam Chih-bing, who is trying to end a five-year title drought at the Panasonic Open India 2013, said he faced one of the biggest tests in the career as he heads into the weekend round two shots off the lead.

The Singaporean knows that he will need to stay focused to grind out a victory at Delhi Golf Club this week.

"You can know the course very well but you still have to perform," said Lam. "I'm very happy to be where I'm. It certainly wasn't easy out there today I felt I played solid. It was a disappointing finish but three-under for today is a very good score."

Starting on the back-nine 10th, the 36-year-old Lam looked set to be cruising home with a bigger advantage but stumbled home with two bogeys on his closing eighth and ninth holes.

Comments
Topics mentioned in this article
Golf Shiv Kapur S.S.P. Chowrasia Kieran Pratt Wade Ormsby C Muniyappa Chih-Bing Lam Anirban Lahiri Oliver Wilson Sujjan Singh
Get the latest updates on SA vs IND 2021-22, check out the Schedule and Live Score . Like us on Facebook or follow us on Twitter for more sports updates. You can also download the NDTV Cricket app for Android or iOS.