SSP Chawrasia and Kiradech Aphibarnrat, together put on display some excellent teamwork to provide the lone win for Team Asia in EurAsia Cup. 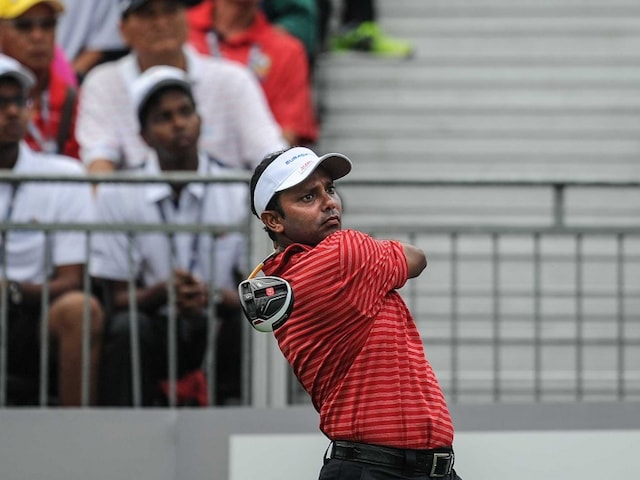 Team Asia SSP Chawrasia of India tees off on the first hole during the 2016 Eurasia Cup Golf tournament at the Glenmarie Golf and Country club in Shah Alam, Kuala Lumpur.© AFP

SSP Chawrasia registered his first-ever point in an international Team event, while Anirban Lahiri lost for the second successive day as Team Europe doubled their overnight lead to six points and went up 9-3 after two days of the EurAsia Cup. (Read More in Golf)

The two teams will play 12 singles on Sunday.

Asia can take courage form the fact that two years ago, they hit back from a four-point deficit to tie the match 10-10 on the final day.

The small built Chawrasia and the heavy set Kiradech Aphibarnrat, together put on display some excellent teamwork to provide the lone win for Team Asia.

They beat the six-foot-six Englishman Chris Wood and Swede Kristoffer Broberg 2-up in the foursomes.

Giving Team Asia another half point were once again Malaysians Danny Chia and Nicolas Fung, who halved the match against Victor Dubuisson and Soren Kjeldsen.

After Fung missed a three-footer to give the Europeans the hole, it came down to the 18th and Chia holed a tense six-footer to halve it.

"It's a great feeling to get a point for the team. I think we won only because we played like a team. He covered my back when I was in trouble and I tried to cover his back. Kiradech hit the ball very well and I putted nicely. I did not hit the ball very well today, but I think I made up for that on the greens," said Chawrasia.

"We wanted to play together right from Thailand Golf Championships in December, where we together in one of the rounds. So, we knew what to expect from each other in the fourballs and then today in foursomes. Kiradech hits the ball a long way and I would putt. The combination of a long-hitter and short-hitter worked out very well or us."

Lahiri and his partner Wu Ashun had another off-day, as the experienced 42-year-old Lee Westwood and Matthew Fitzpatrick, who is half his age at 21, produced a master-class for a 5&4 win for the Europeans in the shortest match of the day.

Ironically, it was the Asians who won the first hole, but thereafter faltered on the green and the Europeans won the second and third and then four in a stretch of six holes from ninth to 14th.

The Europeans shot six-under for the 14 holes they played underling their amazing play.

Lahiri, who played a pivotal role for Asia with two points two years ago, said, "It was very disappointing. I think for foursomes, the whole point is for both of us to keep it on the fairway and hit a lot of greens and take our opportunities. I don't think we did that very well today. On too many holes either I put Wu out of position or he put me out of position. It's hard to recover from there. We lost a few holes to pars, and that's what you can't really do in this format."

"I don't think we played that bad to lose 5 & 4, but I think we lost three or four holes in the last six. It slipped away really quickly. Unfortunately you have to play good around the bend here. All the matches, they are pretty much being decided between holes 8 and 14 in terms of the momentum swing. That's the stretch I played badly yesterday, I played badly today," he added.

In the other matches, Asia's first day winners, Byeong

Hun An and Thongchai Jaidee were outplayed by Ian Poulter and Danny Willett, who were four-up by the sixth and even a late fight back by the Asians was of not use as the Europeans won 3&2.

Shane Lowry and Andy Sullivan after trailing Prayad Marksaeng and Shingo Katayama by one hole till the eighth, played superb and aggressive golf to win six of the next eight holes - they lost the other two - to romp home 3&2.