Shiv Kapur Makes Cut at US Open Despite Triple Bogey

Shiv Kapur tied 68th after the first round at the prestigious US Open, where he bogeyed three times on the back to finish with 73, rose to 35 places and was among the big movers on second day. 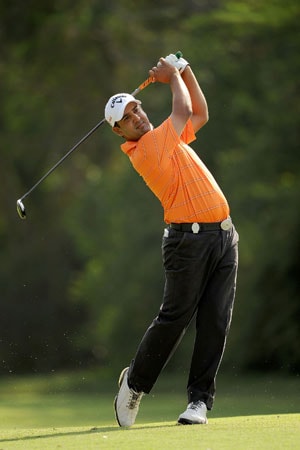 Not even a crippling triple bogey on the stretch back home could stop Indian golfer Shiv Kapur from making the midway cut at the US Open.

Kapur, who was three-under for the day through 15 holes, made a triple on the par-4 16th, but kept control of his nerves to finish with pars and a card of even par 70 after a first round 73.

At three-over 143, Kapur was tied 33rd to become only the second Indian, after Jeev Milkha Singh to make the cut in a US Open.

Kapur tied 68th after the first round, where he bogeyed three times on the back to finish with 73, rose to 35 places and was among the big movers on second day.

It was Kapur's only mistake on the day. Playing his maiden US Open, Kapur birdied the third, fifth and 11th holes and in between he missed a makeable birdie on ninth, too. At three-under for 15 holes, he looked set to stay in top-15 for the first 36 holes.

Then on the long 532-yard par-4 16th, he found the fairway bunker from the tee and was unsuccessful in getting out of it with a 5-Wood. He chipped out but only to get into a greenside bunker and then missed an up and down for a seven.

Kapur's birdies came on the third where he took advantage of the tee being moved up and he got close to the green with his tee shot. His lob wedge landed within two feet for a tap-in birdie.

On the par-5 he nearly got onto the green in two. He chipped and putted for a birdie and on the 11th and his second shot landed about 12 feet from the flag, from where he holed for a third birdie.

Then came the triple bogey, but he handled it well and did not let it disturb the day.

The cut fell at five-over-145. Sixty-six professionals and one amateur made the cut.

It was the second cut in a major for Kapur and he is in a position to improve on the best finish by an Indian, the 36th place finish by Jeev in 2007.

At the top, playing a bogey-free second round Martin Kaymer continued his domination of the US Open as he moved into a six-stroke lead.

The German's second consecutive 5-under-par 65 set a 36-hole US Open scoring record of 130. His six-shot cushion matched Tiger Woods (2000) and Rory McIlroy (2011) for the largest midway lead. Both Woods and McIlroy went on to win the championship.

McIlroy held the previous 36-hole record of 131 in 2011 on rounds of 65-66 at Congressional Country Club. Kaymer is only the sixth player in US Open history to reach double-digits under par.

Following Thursday's opening-round 65, Kaymer felt another such score was possible. But with a morning starting time and benign conditions - little wind and receptive greens he pulled it off once again on the par-70 course that measures 7,428 yards.

"I think that, obviously, you need to play very solid," said Kaymer. "You need a little bit of luck here and there, and that was on my side so far. It's quite nice. I'm enjoying it."

Recent first-time PGA Tour winner Brendon Todd trails by six after posting a 3-under 67 on Friday, while Kevin Na and Brandt Snedeker are seven back at 3-under 137.

Thirteen players are in red numbers through 36 holes. The cut came at 5-over 145 with 67 professionals and reigning US Amateur champion Matthew Fitzpatrick of England, advancing to the weekend.

Defending champion Justin Rose is 11 back at 141, while six-time runner-up Phil Mickelson, needing the US Open title to complete the career Grand Slam, might be too far back at 143 after shooting a 3-over 73 on Friday.