Anirban Lahiri, who seemed to have put himself in a spot with a first round 75, carded 68 to move to tied 24th alongside Rahil Gangjee (73-70). 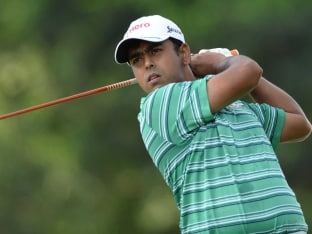 Anirban Lahiri fought his way back in the second round with a three-under 68 even as Manav Jaini (68-72) and Shankar Das (70-70) advanced to the top-10 at the half-way mark of the Queen's Cup golf tournament at the Santiburi Country Club here on Friday.

Making a fine comeback after a disastrous 78 in first round was Rashid Khan, the SBI-SAIL Open winner, whose second round 66 was the joint best round of the day. Rashid is tied 34th, alongside Jyoti Randhawa (71-73).

Jaini, who has finished in top-10 in Asian Tour events at his home course in Delhi, had two birdies and three bogeys.

Lahiri's round had just one bogey against four birdies, three of them on his first nine, the front side of the course.

But the star was Rashid, who began with an aggressive manner, notching three birdies in first four holes, but also dropped bogeys on second and sixth. Then on back nine he had four birdies and no blemishes.

Leader Poom, 21, produced some breath-taking golf as he fired four birdies, including a 30-foot stunner on the third hole, to move to nine-under 133.