Having slipped to third place at nine-under 207 after his 70 in the penultimate round, S Chikkarangappa shot a tenacious final round of three-under 69 en route to his one-shot win with a 12-under 276 and a prize purse of Rs 2,250,000. 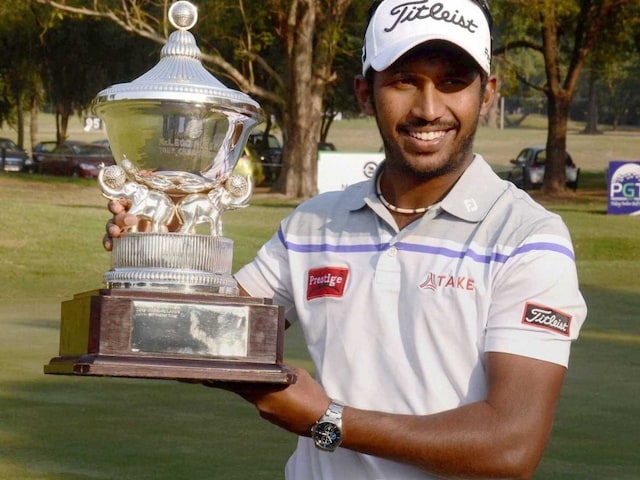 Bangalore's S Chikkarangappa made a double delight by capping a memorable 2015 with a victory at the season-ending McLeod Russel Tour golf Championship that also sealed his maiden Rolex Player of the Year title for the PGTI order of merit here on Sunday.

Having slipped to third place at nine-under 207 after his 70 in the penultimate round, the Bengaluru lad who has trained with Asian Tour winner Anirban Lahiri, shot a tenacious final round of three-under 69 en route to his one-shot win with a 12-under 276 and a prize purse of Rs 2,250,000.

Gurgaon-based Indian golfing great Jyoti Randhawa and Khalin Joshi, another Bangalorean, were joint runners-up at 11-under 277 at the Rs. 1.5 crore event that concluded at the Royal Calcutta Golf Course today.

Chikka's brilliant win at RCGC took his season's earnings to an outstanding Rs 48,87,440 as he climbed from second place to top the Order of Merit and take home the Rolex Player of the Year title.

At 22 years and three months of age, Chikka became the youngest winner of the Rolex Ranking title.

In his seven starts in the season he posted three wins, a runner-up and three other top-10s.

"I quite enjoy playing here. I had been finishing second in the merit list for the last two years so winning the first title three years after turning pro means a lot to me. This is a dream come true," Chikka said with a broad grin.

Having slipped to third yesterday, Chikka produced a consistent show with five birdies including one in the 17th hole to jump up the leaderboard.

"The turning point was the 17th hole and I was sure of bagging the title," he said.

Having struggled with a stomach bug throughout yesterday, overnight leader Randhawa slipped to second as he was not in his elements carding four bogeys.

The seasoned Mukesh Kumar of Mhow, who finished tied sixth at five-under 283 this week, claimed second place on the 2015 PGTI merit list with earnings of Rs 39,41,710.

Bengaluru's Udayan Mane, who finished tied 20th this week at one-over 289, won the 2015 PGTI Emerging Player of the Year title for recording the highest earnings among the rookies this season.

Mane's earnings for 2015 stood at Rs 22,21,507 as the Pune lad also finished a creditable fifth in the Rolex Ranking.