Rory McIlroy blitzed the field on a marathon on Sunday at the PGA Championship, claiming his second major title with a record-setting eight-shot victory on the wind-swept Ocean Course.

Rory McIlroy blitzed the field on a marathon on Sunday at the PGA Championship, claiming his second major title with a record-setting eight-shot victory on the wind-swept Ocean Course. 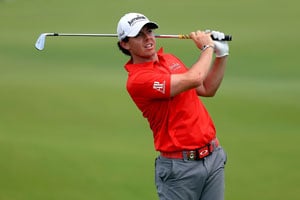 The 23-year-old Northern Irishman surpassed Luke Donald to become the No. 1 ranked player in the world as he closed with a six-under 66 in the final major championship of the season.

McIlroy capped his brilliant bogey-free performance with a 24-foot birdie putt on the last hole to reach a 13-under 275 total.

"I played solid all throughout the week," McIlroy said. "I thought my putting today was phenomenal.

"It has been an incredible week. I had a good feeling about it at the start. But I never imagined to do this."

The challengers all fell by the wayside as McIlroy earned his second dominating major championship win. He won the 2011 US Open also by a whopping eight strokes.

McIlroy, who earned $1.4 million in prize money, ended up having to play 27 holes on Sunday. He began his fourth round with a three-stroke lead after finishing off nine holes of the suspended third round early on Sunday.

More than three inches (seven centimeters) of rain have fallen on the Kiawah Island Golf Resort course this week resulting in some of the most difficult playing conditions ever for a PGA Championship and creating problems with the scheduling.

McIlroy became the first player this year to convert a 54-hole lead in a major championship into a victory.

He also puts his name on the Wanamaker Trophy alongside some of the games' best golfers in history.

McIlroy not only becomes the youngest player to win the PGA Championship since it went to stroke play in 1958 but he sets the all-time record for widest margin of victory in tournament history. The previous record of seven shots was held by Jack Nicklaus.

"It means an awful lot to look at the names on that trophy and put my name alongside theirs," McIlroy said. "This is something very special and I am just going to enjoy this tonight."

He got off to a solid start by making birdie on two of his first three holes in the final round. While his start was superb, he saved his best for the last as he drained a 24-foot putt on 18 to put an emphatic stamp on the win.

"There is quite a bit of relief to get the second one out of the way. I am just so happy I was able to play like this and win another major," McIlroy said.

Lynn made the most of his PGA Championship debut as he posted three birdies, including two straight, on the more difficult back nine.

Pettersson, Poulter, Rose and Tiger Woods all threatened at certain times of the weekend but no one was able to keep pace with the on-fire McIlroy down the stretch.

"There was only one winner today. Rory played great," said Pettersson, who was slapped with a two-stroke penalty on the first hole for "moving a loose impediment in a hazard".

Woods, who was chasing his 15th career major title, shot a final round even-par 72 to finish in a tie for 11th at two-under 288.

He could have surpassed Donald for the world number one ranking this week with a win but the top spot ended up going to McIlroy after Donald finished well back in a tie for 32nd.

Woods said he didn't get it done on the weekend because he came in with the wrong mindset.

"Yesterday, I was too relaxed and that is not how I play," Woods said. "I am pretty intense.

"I just need to do some fine tuning as we head into the Ryder Cup and the rest of year."

Poulter got off to a flying start in the fourth round, rolling in five birdies in a row, including a 20-footer at the fifth to get within one shot of McIlroy. But he couldn't maintain it on the back nine and slipped down the leaderboard.

"I couldn't ask for a better nine holes," Poulter said. "I guess I ran out of steam."

Comments
Topics mentioned in this article
Golf Rory McIlroy Tiger Woods
Get the latest updates on ICC T20 Worldcup 2022 and CWG 2022 check out the Schedule, Live Score and Medals Tally. Like us on Facebook or follow us on Twitter for more sports updates. You can also download the NDTV Cricket app for Android or iOS.