Rory McIlroy shot a 5-under 67 in the opening round on Thursday at the Abu Dhabi Golf Championship for a share of the early clubhouse lead, three strokes in front of playing partner Tiger Woods. 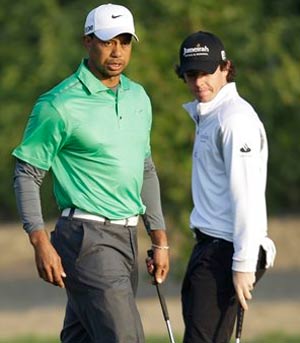 Rory McIlroy shot a 5-under 67 in the opening round on Thursday at the Abu Dhabi Golf Championship for a share of the early clubhouse lead, three strokes in front of playing partner Tiger Woods.

McIlroy, the US Open champion who has had three top-five finishes in Abu Dhabi, made three birdies in his first four holes but erratic driving led to two bogeys on the next four. He steadied himself with three birdies on his back nine, including a chip-in on No. 8 from just off the green.

Robert Karlsson of Sweden also had a 67. The pair were a shot ahead of Gareth Maybin of Northern Ireland.

Woods holed two birdies in a bogey-free 70, but struggled on the greens, missing several putts.

Top-ranked Luke Donald (71) was four shots behind, while second-ranked Lee Westwood and fourth-ranked Martin Kaymer were still on the course.

"It's a nice way to start the competitive season, I suppose," McIlroy said. "I didn't feel like I played that good. I definitely didn't strike the ball as good as I have been the last couple of weeks. I think it's just because your first competitive round of the season, card in your hand, you can get a little bit tentative or a little apprehensive."

McIlroy, who calls Woods a friend and was chatting with his playing partner for much of the day, made little of beating him in the first round.

"If it was the last day of the tournament and you're both going in there with a chance to win, I would take a lot of pride from that obviously," said the 22-year-old from Northern Ireland who has talked of idolizing Woods as a teenager and following him during a Dubai tournament when he played as an amateur in 2006 and 2007.

Woods played a solid round of bogey-free golf that produced few momentous shots and two birdies. He missed several birdie chances, including a 6-footer on his ninth, the 18th hole.

"Hit the ball well all day today. It was a good ball-striking round," Woods said. "I had a hard time reading the greens out there. The greens were pretty grainy and I just had a hard time getting a feel for it. Toward the end I hit some pretty good putts, but overall I got fooled a lot on my reads."

Coming off a seven-week layoff, Woods has said he is fitter than he has been in years and brimming with confidence following his victory at the Chevron World Challenge last month. That ended a two-year run without a win. Before last month's win, Woods finished third at the Australian Open, and then delivered the clinching point for the American team in the Presidents Cup.

Since the Chevron, Woods has moved up to 25th in the world after falling outside the top 50 last year.

"It felt the same as it had from Oz to the World Challenge to here," Woods said of his game. "I controlled my ball all day and just had a hard time getting a feel for these greens. They are grainy enough where I just didn't quite read them right, and I hit them good, and then the grain would take it, not take it. It was just difficult."

The 27th-ranked Karlsson went to 5-under when he holed a 50-foot putt on the 8th hole, one of his seven birdies on the day. The Swede also had two bogeys.

"I'm very proud of myself, managed to turn something that wasn't very good into something very good on the scorecard and very happy with that," said Karlsson, who joined the PGA Tour and moved his family to the United States last year. "I don't think we are going to play many tournaments this year that's going to be a stronger field than this."