Rory McIlroy, seeking his fourth major title and second in a row after capturing the British Open three weeks ago, fired a four-under-par 67 to seize a one-shot lead over Jason Day and Jim Furyk in the year's final major, standing on nine-under 133 after 36 holes. 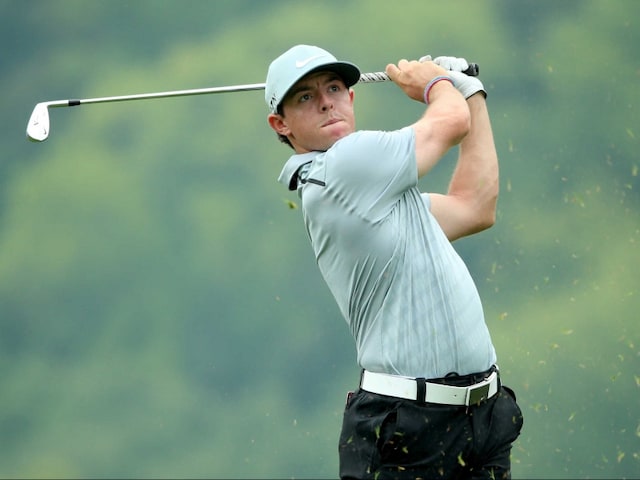 Rory McIlroy of Northern Ireland hits his tee shot on the eighth hole during the second round of the 96th PGA Championship at Valhalla Golf Club on August 8, 2014 in Louisville, Kentucky.© AFP
Louisville, USA:

Rory McIlroy charged to the lead Friday at the PGA Championship but Australian Jason Day and Americans Jim Furyk, Phil Mickelson and Rickie Fowler moved within striking distance for the weekend trophy fight.

McIlroy, seeking his fourth major title and second in a row after capturing the British Open three weeks ago, fired a four-under-par 67 to seize a one-shot lead over Day and Furyk in the year's final major, standing on nine-under 133 after 36 holes.

"Really happy with the day's work -- another great chance to win a major this weekend," McIlroy said.

The 25-year-old from Northern Ireland, who started on the back nine, birdied two of his last three holes, closing with a 16-foot birdie at the ninth after sinking one from half that length at the par-five seventh.

"I can't wait until tomorrow to get back on the course and do the same thing all over again," McIlroy said.

"I'm just going to try and keep the pedal down and get as many ahead as possible."

Heavy rain soaked the course in the morning, softening the 7,458-yard layout for afternoon starters like Day, the 2011 Masters runner-up and 2011 and 2013 US Open runner-up.

The 26-year-old Aussie fired the day's low round of 65, starting with three birdies and an eagle in the first eight holes and closing with back-to-back birdies, just as Furyk did to match him.

"We got a little lucky on the draw, teeing off in the afternoon. We didn't get as much rain," Day said. "The guys in the morning, it was pouring pretty hard."

Tiger Woods, a 14-time major champion who has not won a major since the 2008 US Open, was nagged by back problems and fired his second 74 in a row to finish on 148, missing the cut by five strokes in a share of 117th.

"I tried as hard as I could," Woods said. "That's about all I've got. Unfortunately just didn't play well."

Woods, who pulled out of the final round last week in Akron with a back injury, said he was ready to play when he arrived Wednesday at Valhalla but his back began bothering him on the driving range Friday.

"It was sore," Woods said. "It went out on me on the range. Just had to play through it."

Fowler, a runner-up at the British and US Opens, had seven birdies and three bogeys in the first 11 holes then closed with a birdie for a 66 to join countryman Ryan Palmer in third on 135.

Palmer teed off in a heavy downpour that caused a 45-minute delay, but not before being forced to hit two shots into the water-logged first hole.

"You could barely see the fairway," Palmer said. "We were questioning why we have to hit a second shot into a green that's already half in standing water. They said, that's just golf."

Five-time major winner Mickelson was another stroke adrift after a 67 that ended with an eight-foot eagle putt.

"It was a long day, but for me it was a good day," Mickelson said. "To shoot four-under puts me in good position for the weekend.

"Obviously Rory is playing great golf. There's a lot of guys right there. Out of that group somebody is going to get hot. I think that I have a hot round in me, too."

McIlroy said that if he kept to his routine he would be difficult to overtake.

"I expect to stick to my game plan. I expect to execute my shots. I can't control what other people do," McIlroy said.

"But do I expect to control the things I know I can do? Yes. And I know that if I do those well, there's a good chance that I will win."

McIlroy, whose other major wins include the 2012 PGA Championship and 2011 US Open, won his first World Golf Championships title last Sunday in Akron, Ohio.

He could become the first man since Padraig Harrington at the 2008 British Open and PGA to win back-to-back major titles and could join Woods and Phil Mickelson as the only male golfers in the last quarter-century with wins the week before they won a major.

"It would be huge," McIlroy said. "But there's a lot of golf left to play."

Comments
Topics mentioned in this article
Rory McIlroy Jason Day Jim Furyk Tiger Woods Golf
Get the latest Cricket news, check out the India cricket schedule, Cricket live score . Like us on Facebook or follow us on Twitter for more sports updates. You can also download the NDTV Cricket app for Android or iOS.