Langley, 23, who earned his full-time Tour card at qualifying school, shot an eight-under 62 -- with his round at the Waialae Country Club including a 56-foot eagle shot and a 29-foot birdie putt. 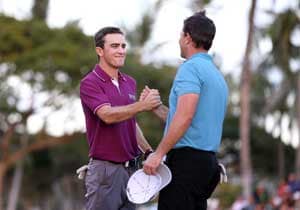 American rookie Scott Langley made an impressive start to his PGA Tour career Thursday, going bogey free in the opening round of the Sony Open to seize a one-shot lead.

Langley, 23, who earned his full-time Tour card at qualifying school, shot an eight-under 62 -- with his round at the Waialae Country Club including a 56-foot eagle shot and a 29-foot birdie putt.

He ended one shot ahead of playing partner and fellow rookie Russell Henley, a three-time winner on the Web.com Tour, who was alone in second spot.

"I was pretty nervous starting out," Langley said. "I settled down after three or four holes and made some nice birdies early. That got me in a nice rhythm for the day.

"Looking back at all my rounds professionally thus far, this might be the best one."

Americans Matt Kuchar, US Open champion Webb Simpson and Tim Herron are among 10 players tied for seventh at four-under 66.

Langley is no stranger to high-level golf. He tied for low amateur three years ago in Pebble Beach and previously qualified for two US Opens.

"I am a young guy," said Langley, who used to play on the Hooters Tour. "But I am old enough to know that we have a lot of golf left. I am excited about the next few days."

Langley had a hot putter throughout his round. He got off to a quick start by making a 14-foot putt for birdie at the second hole.

He also made birdie putts of 23 and 25 feet at the third and fourth to quickly move to three-under. After four straight pars, Langley drained a 56-foot eagle shot to make the turn at minus-five.

At the par-four 16th, Langley rolled in a 29-foot birdie putt to move into the lead. He then got up and down for birdie at No. 18 to finish one stroke ahead of the field.

"I was just trying to keep up. He got off to a hot start, we both did. It was just fun to compete out there. I was very comfortable playing with Scott," Henley said.

Comments
Topics mentioned in this article
Tennis Golf
Get the latest updates on ICC T20 Worldcup 2022 and CWG 2022 check out the Schedule, Live Score and Medals Tally. Like us on Facebook or follow us on Twitter for more sports updates. You can also download the NDTV Cricket app for Android or iOS.