With only six players shooting under par, and another 11 carding even par 72, Gangjee and Kapur were tied for 18th place, while the other Indians were further down. 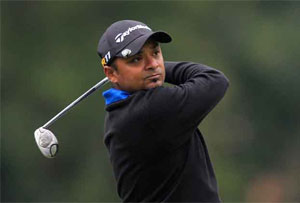 Rahil Gangjee and Shiv Kapur were the best Indians with cards of one-over 73 each on a day when blustery conditions held the spotlight on the opening round of the USD 600,000 Mercuries Taiwan Masters here on Thursday.

With only six players shooting under par, and another 11 carding even par 72, Gangjee and Kapur were tied for 18th place, while the other Indians were further down.

Gaganjeet Bhullar, winner of two titles on Asian Tour last season, and Himmat Rai carded 74 each to be tied 35th and Ajeetesh Sandhu (76) was 61st and Anirban Lahiri (79) was 95th.

Australia's Scott Hend took advantage of the blustery conditions by posting a three-under 69 to take the first round lead.

Sam Cyr of the United States and Finland's Kalle Samooja, who were among the early pace setters in the morning, took a share of second place with their matching 70s alongside Australian rookie David Lutterus at the Taiwan Golf and Country Club.

Gangjee had three birdies against four bogeys, while Kapur had as many as six birdies, but also gave away five bogeys and one double bogey.

Bhullar had four birdies, but was done in by a quadruple bogey on par-4 11th.

Thailand's Prayad Marksaeng, a seven-time Asian Tour winner, took a share of fifth place with Australia's Adam Groom on 71 while reigning merit champion Thaworn Wiratchant signed for a 72 to be bunched with 10 other players on equal seven at the richest Asian Tour event to be staged in Chinese Taipei this season.

While the gusty winds may have posed stiff challenges to many of the players at the Taiwan Golf and Country Club, Hend showed he was equal to the task with another assured performance.

Comments
Topics mentioned in this article
Golf Gaganjeet Bhullar Anirban Lahiri Shiv Kapur Rahil Gangjee
Get the latest updates on ICC T20 Worldcup 2022 and CWG 2022 check out the Schedule, Live Score and Medals Tally. Like us on Facebook or follow us on Twitter for more sports updates. You can also download the NDTV Cricket app for Android or iOS.