Britain's Lee Westwood, eight times a top-three major finisher but yet to hoist a trophy, matched his best round in a major with a six-under par 65 at Valhalla to finish level with Americans Ryan Palmer and Kevin Chappell atop the leaderboard. 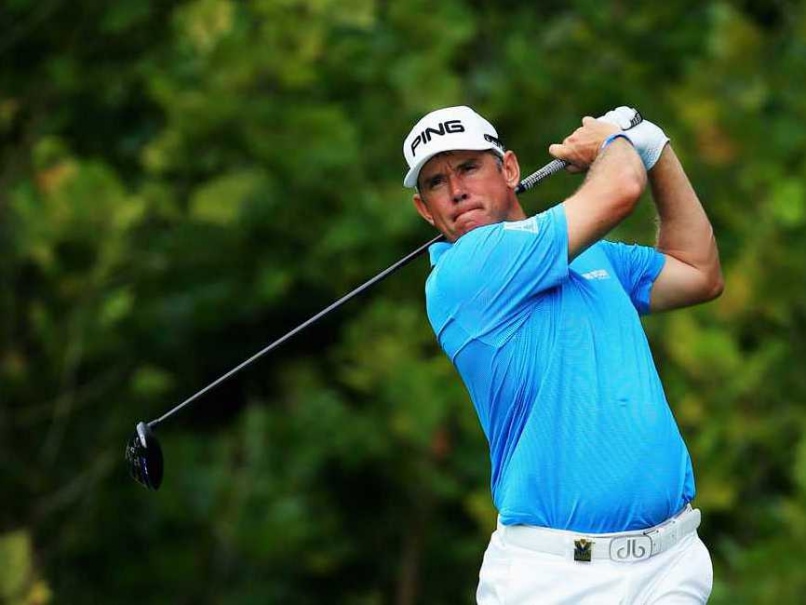 Lee Westwood of England hits his tee shot on the 18th hole during the first round of the 96th PGA Championship at Valhalla Golf Club on August 7, 2014 in Louisville, Kentucky.© AFP
Louisville, USA:

Lee Westwood birdied his last four holes to grab a share of the lead Thursday at the PGA Championship, with top-ranked Rory McIlroy one back after his own four-birdie run.

Britain's Westwood, eight times a top-three major finisher but yet to hoist a trophy, matched his best round in a major with a six-under par 65 at Valhalla to finish level with Americans Ryan Palmer and Kevin Chappell atop the leaderboard.

And 14-time major winner Tiger Woods struggled to find greens and fairways in shooting a 74, sharing 109th and in jeopardy of missing the cut without any trouble from the back injury that threatened to sideline him this week.

It was 41-year-old Englishman Westwood who stole the show, opening with a 20-foot birdie on the 10th hole and overcoming a double bogey at the first with birdies on five of his last six holes, closing with a 40-foot birdie putt at the ninth.

"It's my lowest round in a major," Westwood said. "I've played better rounds of golf but I was really pleased with today.

"I played well, hit a lot fairways, putted nicely. I gave myself a lot of chances. All in all there was no real weaknesses out there."

Westwood's only other major 65 came in the third round of the 2011 US Open at rain-soaked Congressional Country Club.

After taking two shots to escape the rough for a double-bogey disaster at one, Westwood responded with a three-foot birdie at the fourth, added a 14-footer at six, then drained birdie putts of six and 16 feet ahead of his epic closer.

His lone triumph this year came at the Malaysian Open a week after finishing seventh at the Masters, but a big key to his successful start this week was his final-round 63 at last week's World Golf Championship event in Akron, Ohio.

"That gave me some confidence coming into this week," Westwood said.

McIlroy, who won last month's British Open at Royal Liverpool and last week's World Golf Championships event, lived up to his favorite's billing by also battling back after a double-bogey disaster.

He made the turn three-under, then began the back-nine double bogey-bogey.

"It sort of knocked me off track," McIlroy said. "Walking to the 12th tee I was muttering a few things to myself."

McIlroy responded with birdies at the 12th through 15th holes, three putts from inside five feet plus a 30-footer at 14, and a two-putt birdie from 30 feet at the par-5 18th left him on the leaders' heels.

"You have to take what you're feeling inside and turn it into a positive," McIlroy said. "I was hot. It's trying to use that fire as fuel to sort of propel yourself forward.

"It was great. I think it just shows where my game is mentally right now as well that I was able to do that."

Defending champion Jason Dufner, nagged by a neck injury, withdrew after a triple bogey at the 10th that put him eight over. And another potential US Ryder Cup player, sixth-ranked Matt Kuchar, did not start due to back spasms, the same problem that Woods overcame to play.

Woods, who turns 39 in December, sprayed shots beyond cart paths and into deep rough time and again. He made bogeys at the par-3 11th and 14th after missing the greens and woeful tee shots led to bogeys at the first and second.

The lone birdie for Woods came when he holed out for birdie on a 34-yard shot from the fairway at the 16th.

Five-time major winner Phil Mickelson opened with a 69 and said playing partner Woods "played with a lot of heart."

Unheralded co-leader Chappell, still seeking his first PGA title, has yet to crack the top nine in 24 starts this season.

Co-leader Palmer, seeking his first victory since 2010, chipped in for birdie from 35 feet at the fifth and led at seven-under before a four-foot par miss at eight.

"A little disappointed," Palmer said. "But excited to be (leading) for the first time."

US and British Open runner-up Rickie Fowler fired a 69 with British Open co-runner-up Sergio Garcia on 70 and world number two Adam Scott of Australia on 71.

Comments
Topics mentioned in this article
Lee Westwood Rory McIlroy Golf
Get the latest updates on IPL 2020, check out the IPL Schedule for 2020 and Indian Premier League (IPL) Cricket live score . Like us on Facebook or follow us on Twitter for more sports updates. You can also download the NDTV Cricket app for Android or iOS.