Italy's Edoardo Molinari will do battle with a host of home talent when he makes his debut at the Hero Indian Open starting Thursday, and says he will need to get his putter going for a chance to win. 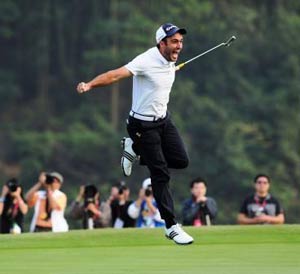 Italy's Edoardo Molinari will do battle with a host of home talent when he makes his debut at the Hero Indian Open starting Thursday, and says he will need to get his putter going for a chance to win.

Molinari, the highest ranked player in the tournament at world number 55, will spearhead a field including Indian star S.S.P Chowrasia and rising talents Anirban Lahiri and Himmat Rai.

The US$1.25 million event at the Delhi Golf Club will also feature an in-form Siddikur of Bangladesh and title holder Rikard Karlberg of Sweden.

"It is my first time playing in India and it will be awesome to get a victory here," said Molinari, who is seeking a third victory in Asia.

"I've never played in India but I've have played in the other Asian Tour and European Tour co-sanctioned events in Asia and I know some of these guys here will put up a strong challenge."

The 30-year-old Italian has travelled some of the world's best golf courses but said the historical monuments around the club in Delhi make it unique.

"There's a lot of history in this country and on this golf course which explains the monuments on the course," he said.

"The Indian Open is huge on the Asian Tour and I've been in good form. I just need to get my putter going and hopefully get a win here."

Lahiri, 23, who won the Panasonic Open on the same course in April, said he was delighted to return to the venue.

"This year has been a complete turnaround for me thanks to Delhi Golf Club," he said.

"That was really good as it set up my year perfectly. It is nice to be playing here again."

Meanwhile, Swedish stalwart Karlberg, 24, the self-proclaimed King of Delhi, said he planned to continue his reign -- at the club where he won twice in his rookie season last year.

"When I'm here I always feel confident because I'm a straight shooter which works well on this course," he said.

"I'm here to win and I've proved that I'm able to get a good result here."

India's Digvijay Singh, 39, fighting to save his Asian Tour card for next season, predicted a bright future for the sport in his country.

"Golf in India is booming. We are only going upwards as far as money and exposure in the sport is concerned," he said.

"With so many courses springing up in the country, I think we will be having more tournaments in the future."

Comments
Topics mentioned in this article
Golf Badminton Anirban Lahiri Sujjan Singh C Muniyappa Rikard Karlberg
Get the latest Cricket news, check out the India cricket schedule, Cricket live score . Like us on Facebook or follow us on Twitter for more sports updates. You can also download the NDTV Cricket app for Android or iOS.