Modest Even Par Start for Anirban Lahiri in United States

Anirban Lahiri's driving off the tee was once again off as he managed only 50 per cent fairways and needed 32 putts, and found two-thirds of the greens in regulation. 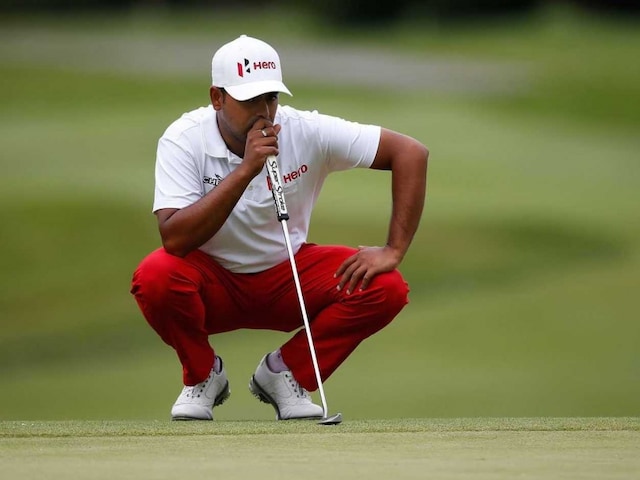 Anirban Lahiri needed a birdie on the very last hole to haul himself back to even par and stay afloat at the end of the first round of the Small Business Connection Championship at River Run, the second of four Web.com Tour Finals events.

Lahiri, however, continues to be well-placed in the race to grab one of the 25 all-important PGA Tour cards for 2016 as he is fifth in the separate money list of the Four-event Final Series.

The Indian, who finished tied-sixth after having been in contention for two rounds last week at Hotel Fitness Championships, had a decent start before lapsing into a rough patch with three bogeys in four holes between the fifth and eighth holes.

Lahiri's driving off the tee was once again off as he managed only 50 per cent fairways and needed 32 putts, and found two-thirds of the greens in regulation.

Lahiri, winner of the Malaysian Open and Hero Indian Open, two prominent events on European Tour, has initially committed to only the first three events in the four-event Web.Com Tour Final series. But in those, he will need to stay in the top-25 of a Separate Money List compiled for the Final Series.

While Lahiri has said that he will take a break after the first three events and skip the Tour Championships to take a week off before the Presidents Cup, it remains to be seen what he will do if he is close to sealing the card after three events.

Meanwhile, Brett Stegmaier posted a 9-under 63 and grabbed the first-round lead. Stegmaier rolled in several long birdie putts and added a tap-in eagle during his rise to the top of the leaderboard at River Run Country Club in suburban Charlotte.

Stegmaier was in the fourth group off the morning tee and his score held up for the remainder of the day, two shots better than Texan Zack Fischer, who opened his afternoon round with a bogey before turning things positive with eight birdies.

The 32-year-old Stegmaier, who finished tied eighth at last week's Hotel Fitness Championship, started rolling in birdie putts like they were free on Thursday.

Stegmaier closed his first nine holes by cracking a 3-wood to two feet on the par-5, 18th and canned his eagle putt for a 7-under 29.

Stegmaier admitted he was thinking about a 59 after the 18th hole. Things did not go as smoothly on the second nine but Stegmaier opened and closed with birdies for his career-best 63 and the lead.