The 49-year-old Spaniard birdied the first extra hole at the Hong Kong Golf Club to defeat Thailand's Prom Meesawat and Stuart Manley of Wales and collect a winner's cheque of $216,660. 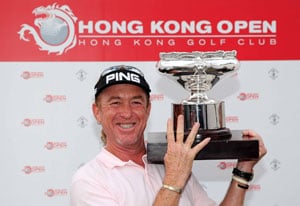 The 49-year-old Spaniard birdied the first extra hole at the Hong Kong Golf Club to defeat Thailand's Prom Meesawat and Stuart Manley of Wales and collect a winner's cheque of $216,660.

Jimenez raised his arm to the air as a fifteen-foot-plus putt dropped into the hole on the eighteenth green -- much to the delight of an adoring crowd in the southern Chinese city.

The victory saw the popular Jimenez match the Taiwanese Hsieh Yung-yo's four wins at Fanling in the 1960s and 1970s and break the record he set last year as the oldest European Tour winner.

"It's very nice to win a fourth title and for two years in a row," a delighted Jimenez said. "It's a very sweet victory."

Jimenez played the extra hole perfectly, hitting his tee shot past his opponents and into a prime position far down the fairway.

"In the playoff I know I needed to make something," he said afterwards, enjoying his trademark cigar and glass of red wine.

"I thought I needed to make a birdie. I hit a beautiful drive down the middle of the fairway then hit a wedge.

"To win in that style makes it even more sweet."

Jimenez started the day two shots behind overnight leader Manley but soon closed the gap with birdies at 3, 11, 13 and 14 as the Welshmen traded bogeys with birdies in an inconsistent round.

As the Spaniard ticked along nicely Prom -- playing in the group ahead of Jimenez -- was tearing up the course to propel himself up the leaderboard.

Two eagles and two birdies put the Thai golfer in the lead on his own at the co-sanctioned European Tour and Asian Tour event before a disappointing bogey at the 14th.

When the Spaniard bogeyed the 15th, the title looked to be heading Prom's way until Jimenez bounced back with a birdie at 17 after missing a good opportunity to pull level on 16.

Jimenez and Prom appeared to be set for a head-to-head in the playoff until Manley dramatically chipped in at the last for birdie and the three headed back down the eighteenth.

There, Manley hit a wayward iron which struck the roof of the hospitality tent, while Prom came up short of the green. Both were heading for fours when Jimenez rolled his putt in.

"It's always hard to win a tournament," Jimenez told reporters. "All the players are good and you have to respect all of them.

"The main thing was I never stopped telling myself to stay calm, live the moment and let everything happen," he said, adding that he would be back in Hong Kong next year to try for a fifth win.

Manley, whose tie for second position was his highest in a European Tour event, said: "It was pretty special for me to even get into the play-off so I can take a lot from that."

Prom, who was two shots ahead at one stage on Sunday, said: "It's been an amazing week for me so I don't feel disappointed.

"It's my best finish in this event and I am pretty happy with the way I am playing right now."

Comments
Topics mentioned in this article
Golf Stuart Manley Prom Meesawat Miguel Angel Jimenez Rory McIlroy
Get the latest Cricket news, check out the India cricket schedule, Cricket live score . Like us on Facebook or follow us on Twitter for more sports updates. You can also download the NDTV Cricket app for Android or iOS.