Another Spaniard Rafael Cabrera-Bello was in second place at three under through eight holes, with 2009 Open champion Stewart Cink, Germany's former world number one Martin Kaymer, Dustin Johnson of the United States and fellow American Jimmy Walker all at two under after a handful of holes. 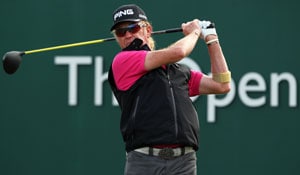 Leaning on his putter and gazing out toward the Firth of Forth, Miguel Angel Jimenez had the look of a contented man as he waited his turn for a birdie attempt under sunny skies on the 11th green.

The pony-tailed, pot-bellied, cigar-smoking Spaniard had birdied five of his first nine holes - including the first three - and was leading the British Open by three strokes early in the first round.

Not bad for a 49-year-old man who recently returned to action after breaking his right leg in a skiing accident.

He couldn't quite keep it up, though, missing that putt and making two bogeys on his back nine to shoot a 3-under 68. But the charismatic Jimenez is still on the leaderboard.

Unless a Scot goes on to lift the claret jug, there would likely be no more popular winner than Jimenez, a Ryder Cup stalwart and the owner of a frame that could generously be described as portly.

He would become the oldest winner of the oldest major - Old Tom Morris holds the record at 46 from back in 1867 - as well as the first Spanish champion at the Open since Seve Ballesteros in 1988.

But Jimenez won't be getting ahead of himself. He has been here before at Opens, where his fast starts are now commonplace.

This year's showing is even more impressive since he missed the first three months of the season after his skiing fall while on vacation in the Sierra Nevada mountain range in Andalucia, southern Spain.

"If you break your leg at 30 years old, you can say, 'OK, I'm going to have a sabbatical year,' but at 49 you don't want to spend any sabbatical day," Jimenez said, laughing. "It's tough so many months without hitting. Just knowing the competition that is around."

Jimenez, who is playing with padding under his left elbow because of tendonitis, became the oldest winner in European Tour history when he won the Hong Kong Open last year at 48 years, 318 days.

Comments
Topics mentioned in this article
Golf Tiger Woods Rory McIlroy Miguel Angel Jimenez Phil Mickelson
Get the latest Cricket news, check out the India cricket schedule, Cricket live score . Like us on Facebook or follow us on Twitter for more sports updates. You can also download the NDTV Cricket app for Android or iOS.