Defending champion Phil Mickelson, resuming his rain-disrupted first round, seized a share of the lead on Friday at the Houston Open with a seven-under par 65. 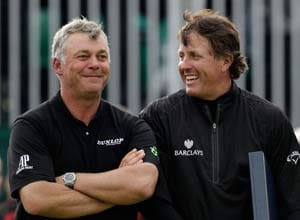 Defending champion Phil Mickelson, resuming his rain-disrupted first round, seized a share of the lead on Friday at the Houston Open with a seven-under par 65.

Mickelson joined two-time major champion Angel Cabrera of Argentina and Sweden's Carl Pettersson atop the leaderboard after one round, with the second round getting underway immediately after.

Both Cabrera and Pettersson completed their rounds on Thursday morning before afternoon thunderstorms halted play.

Mickelson, playing in the featured group with Masters champion Charl Schwartzel and Fred Couples, had completed just three holes when play was suspended on Thursday evening.

More than an inch of rain in a matter of hours had left puddles on several Redstone fairways, making the course unplayable.

Despite Thursday's deluge, Mickelson said the grounds staff had the course in good shape.

"The greens were immaculate," he said. "If you get it in the surface, you'd feel like you'd make the putts."

"There's not much you can do about that," he said.

On Friday morning, Mickelson birdied both par fives on the front nine, one-putted eight straight greens and drained a 10-foot birdie putt at 12.

After his bogey at 13, Mickelson bounced back with a birdie at the par-five 15th and holed out from off the green at 16.

He was slated to begin his second round an hour after completing the first.

Far from being daunted by the prospect of a long, day, Mickelson was looking forward to it.

"I like being able to come out and play a lot of holes in one day," he said. "If you start playing well, you get a good rhythm, you can make a lot of birdies, especially out here."

Mickelson, Pettersson and Cabrera were one stroke in front of England's Greg Owen and Americans Jeff Maggert, Ricky Barnes and John Huh, who all shot 66 in the first round.

Three-time major champion Ernie Els, who must win to book a spot in next week's Masters, completed a 70 on Friday morning.

Comments
Topics mentioned in this article
Golf Brian Davis Louis Oosthuizen Phil Mickelson John Isner Adam Scott Carl Pettersson Angel Cabrera Brandt Snedeker
Get the latest updates on IPL 2021, check out the IPL 2021 Schedule and Indian Premier League Live Score . Like us on Facebook or follow us on Twitter for more sports updates. You can also download the NDTV Cricket app for Android or iOS.