Kuchar, winner of the WGC Match Play Championship at Dove Mountain, joined world number one Tiger Woods as the only multiple winners on the US PGA Tour this season. 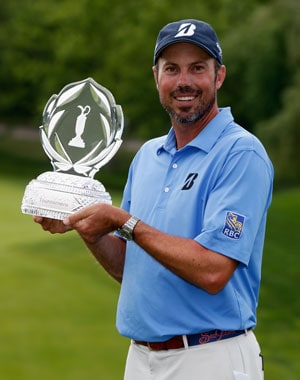 Matt Kuchar capped a four-under par 68 with a birdie at the final hole on Sunday to win the US PGA Tour's $6.2 million Memorial tournament by two strokes.

Kuchar led by as many as four strokes on the back nine and his 12-under total of 276 gave him a two-shot triumph over American Kevin Chappell.

Chappell closed with a bogey-free round in the Jack Nicklaus-hosted event at Muirfield Village, keeping the pressure on Kuchar with four birdies in his last six holes in a four-under 68 for 278.

"This stuff never gets old," said Kuchar, whose young sons Cameron and Carson were at the 18th to help him celebrate. "To shake Mr. Nicklaus's hand, to win the tournament, that's pretty great. But to have my family run onto the green, this is as special as it gets."

Kuchar, winner of the WGC Match Play Championship at Dove Mountain, joined world number one Tiger Woods as the only multiple winners on the US PGA Tour this season.

Woods, a four-time winner already in 2013 and a five-time Memorial champion, wrapped up a disappointing final tune-up for the US Open with an even-par 72 that left him on eight-over 296.

His six at the par-three 12th hole was his second triple bogey of the week.

Woods said he'd work on all aspects of his game before the second major of the year.

But he'll no doubt pay close attention to putting, after struggling on the greens all week.

"I had bad speed all week," Woods said. "I thought the greens didn't look that fast, but they were putting fast. I could never get the speed of them."

World number two Rory McIlroy, also making his last scheduled start before the US Open, was in trouble from Thursday, when he opened with a 78. He fought back to make the cut and also closed out his week with an even-par round that included two birdies and two bogeys for a six-over total of 294.

"I found a couple of little things this weekend," McIlroy said. "I hit the ball much better today. I actually putted a little better, too ... It's not that far away."

Kuchar earned the sixth PGA Tour title of his career, but first Stanley and then Chappell made him work to the end for it.

Stanley had closed within one stroke of Kuchar's lead after a five-footer for birdie at the ninth hole.

But Kuchar stretched his lead back to three at the par-five 11th -- playing as the next-to easiest hole on the course this week -- with 14-foot birdie putt as Stanley bogeyed.

A birdie at the 15th gave Kuchar a four-shot lead, but he gave a stroke back with a bogey at 16.

The steady Chappell, meanwhile, was mounting a late challenge, notching his first birdie of the day at 13 and picking up another stroke at the 15th.

Chappell drained a long birdie putt at 17, where Kuchar was in a bunker and had to make a testing four-footer to save par and preserve a two-stroke cushion.

Chappell left himself a short birdie putt at 18, while Kuchar rolled in his 21-footer to put an exclamation point on his round.

"There at the end it got scary," Kuchar said. "Kevin made a great run, and Kyle played well, too."

Comments
Topics mentioned in this article
Tiger Woods Matt Kuchar Rory McIlroy Golf
Get the latest updates on Olympics 2020, Olympics 2020 Medal Tally, Live Cricket Score . Like us on Facebook or follow us on Twitter for more sports updates. You can also download the NDTV Cricket app for Android or iOS.