Mahan was the first defending champion to return to the final since 2006 winner Geoff Ogilvy of Australia was runner-up in 2007. 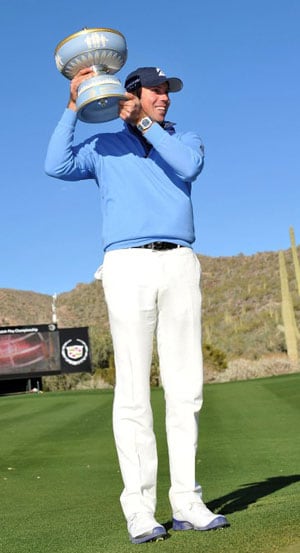 Kuchar, eliminated by Mahan in the quarter-finals of the elite 64-man event last year, avenged that defeat as he prevented Mahan from joining Tiger Woods as the only back-to-back winners of the title.

Mahan was the first defending champion to return to the final since 2006 winner Geoff Ogilvy of Australia was runner-up in 2007.

Kuchar never trailed in the championship match, and in fact trailed for just three holes the entire week. The victory was his first in a WGC event and his fifth on the US PGA Tour.

Kuchar's triumph capped a wild week in the Arizona desert, where a snowstorm that halted first-round play on Wednesday was just the first surprise.

When the first round was finally completed on Thursday, the top two players in the world, Rory McIlroy and Tiger Woods, were on their way home, and the second round saw the next four seeds -- Luke Donald, Louis Oosthuizen and Justin Rose -- eliminated as well.

The delays, which also included some morning frost delays, made for long days. But after the third round and quarter-finals were contested on Saturday, Poulter was looking a good bet to challenge for the title.

But Poulter, whose match play credentials include an unblemished Ryder Cup singles record as well as a triumph in this event in 2010 and in the World Match Play Championship in Spain in 2011, fell to Mahan in the semi-finals on Sunday morning, when a biting wind made for tough going.

Mahan never trailed en route to a 4 and 3 victory over Poulter. He went 1-up at the second hole, and after Poulter squared the match with a par at the fourth, the American immediately regained the advantage with a birdie at the fifth and from there never relinquished the lead.

Kuchar rolled in a five-footer for birdie at the 15th to close out a 4 and 3 semi-final win over Day, who was unable to make his 22-footer to extend the match.

Comments
Topics mentioned in this article
Golf Louis Oosthuizen Rory McIlroy Matt Kuchar Bill Haas Arjun Atwal
Get the latest updates on IPL 2021, check out the IPL 2021 Schedule and Indian Premier League Live Score . Like us on Facebook or follow us on Twitter for more sports updates. You can also download the NDTV Cricket app for Android or iOS.