Lee Westwood has the opening-round lead at a Major for the first time in 55 tries and the 38-year-old Englishman might just capture his first major title this week at the 76th Masters. 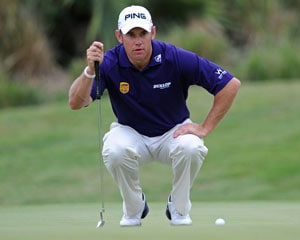 Lee Westwood has the opening-round lead at a Major for the first time in 55 tries and the 38-year-old Englishman might just capture his first major title this week at the 76th Masters.

World No. 3 Westwood birdied four holes in a row on the front nine on his way to a five-under par 67 on Thursday for a one-stroke lead over Sweden's Peter Hanson and 2010 British Open winner Louis Oosthuizen of South Africa.

"It's nice to get off to a good start and have a platform to build from," Westwood said. "Just trying to cruise my way into the tournament, get in a good position and then hopefully stay there."

Westwood said the round might have been the best he has played in the first day at a major, a span dating to the 1995 British Open.

"I played well. I've been playing well all year and I just tried to continue with that," Westwood said. "I hit pretty much every fairway and 16 greens in regulation and rolled a few nice putts in from five to 10 feet, which, when you are hitting it close is productive."

Westwood matched his low score at Augusta National from last year's second round and round one in 2010, when he finished second to Phil Mickelson, in 43 rounds over 13 Masters starts.

"I didn't realize it was the 13th time," Westwood said. "Hopefully that's the lucky number for me."

Westwood was unconcerned that his legacy might be dminished if he never won a major title, worried more about how he is remembered as a man than as a golfer.

"Obviously if I sit down at the end of my career and there's no major championship wins, I'll be disappointed," he said. "If there's five or six, I'll be delighted.

"But at the end of the day, that won't actually change that much, will it? It will be the impression I've had on people and whether I've basically gone away having done more good than bad."

Westwood has produced five top-three finishes in his past nine major starts without collecting that elusive first victory, including second at the 2010 British Open and Masters, and shares of third at last year's US Open and the 2009 British Open and PGA Championship.

"I've been in this position a lot recently, in contention," Westwood said. "When you are in contention and you don't finish it off, you then go home and you assess what you did wrong and where you can improve. So that's what I did.

"I've done a lot of fitness work through winter and start of this year to strengthen up. This is a demanding golf course. There are a lot of hills out there. You're concentrating all the time.

"It's mentally draining and physically draining. So both should help me as the week goes on."

Westwood added to his confidence with his birdie binge, coming as it did after a birdie at the par-5 second and a bogey at the par-3 fourth.

He sank an eight-foot birdie putt at the par-4 fifth, a 10-footer at the par-3 sixth, a six-footer at seven and a tap-in birdie at the par-5 eighth. In each case, he credited the driver and short game for setting up the birdie.

"If I drive the ball well I'm going to get it close to flags," Westwood said. "From there it's just a matter of how many putts I make."

Westwood began the back nine with a bogey but birdied the par-5 13th and par-4 17th to seize the lead, late-day rains easing lightning-fast greens only slightly.

"You always have to been on your guard on these greens," Westwood warned.

Comments
Topics mentioned in this article
Miguel Angel Jimenez Tiger Woods Golf Lee Westwood Phil Mickelson Rory McIlroy Peter Hanson
Get the latest Cricket news, check out the India cricket schedule, Cricket live score . Like us on Facebook or follow us on Twitter for more sports updates. You can also download the NDTV Cricket app for Android or iOS.