Loss for Woods, lead for US in Presidents Cup

Tiger Woods made the first move, reaching out to shake hands with his ex-caddie, that went a long way toward dousing the endless chatter over their acrimonious breakup. 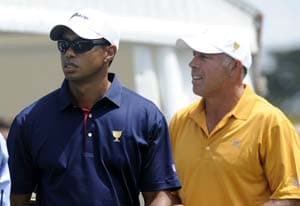 Tiger Woods made the first move, reaching out to shake hands with his ex-caddie, that went a long way toward dousing the endless chatter over their acrimonious breakup.

Twelve holes later, as short a Presidents Cup match that has ever been played, Steve Williams had the last laugh.

In the 112 matches of various formats that Woods has played in his professional career, he never had a loss like this one. Playing again with Steve Stricker, an American tandem that was unbeatable two years ago, they didn't win a hole and didn't make a birdie in tying the Presidents Cup record for the worst loss ever, 7 and 6.

Adam Scott - with Williams on his bag, kept his distance from Woods until they shook hands on the 12th green - and K.J. Choi rarely missed a shot in piling up pars and more than enough birdies. The foursomes match ended with Scott rolling in a 25-foot birdie putt on the 11th, and stuffing his approach into 10 feet for Choi's birdie on their final hole.

"We were just slightly off," Woods said. "On a golf course like this, it doesn't take much."

That match was the biggest surprise on an opening day that featured a few unlikely twists at the end, with the Americans making two late rallies to halve matches and leaving Royal Melbourne with a 4-2 lead over the International team.

It was the third straight time the Americans have won the opening session.

The Woods-Williams pairing was the last to tee off, and the second match to finish. That's how big this blowout was.

"K.J. and I didn't get it out of position today, which is a good thing on this golf course," Scott said. "We both played very well. They got out of position a couple of times, and they didn't play their best. Yeah, a good win. Because they were a tough team last time, took a lot of points off us. So it was pleasing to get one up there."

The caddie squabble meant nothing to Scott, who has tried to stay out of the fray, even after Williams disparaged Woods with a racial comment while getting roasted at a caddies award dinner two weeks ago in Shanghai.

Woods didn't make too much of it, either.

"I put my hand out there to shake it, and life goes forward," he said. "There's some great things that Steve and I did, and that's how I look at it. I know he probably looks at it differently than I do, but hey - life goes forward, and I'm very happy with what we've done in our career together."

Stricker was playing for the first time since September 25 at the Tour Championship because of a neck injury that weakened his left arm. He hooked a tee shot on the par-5 second that kept them from a birdie, though neither of them played well. It was Woods who put them in a bunker on the fifth, and whose tee shot went through the fairway and into an unplayable lie in a bush, both leading to bogeys during a key stretch early in the round when fell 4 down.

The only other match in Presidents Cup history that lasted 12 holes was in Sunday singles in 1996, when David Frost beat Kenny Perry.

Woods and Stricker started their partnership by winning six straight matches, though the last two were big losses - 6 and 5 against Lee Westwood and Luke Donald at the Ryder Cup last year in Wales, and the 7-and-6 loss to Scott and Choi.

Perhaps the biggest surprise is that while the Americans staked themselves to the lead, their only loss - and their weakest team - was Woods and Stricker. Couples split them up for Friday's fourballs - Woods with Johnson, Stricker with Kuchar, although that was the plan earlier in the week.

It will be the first time since the 2007 Presidents Cup at Royal Montreal that Woods has another partner besides Stricker.

Comments
Topics mentioned in this article
Golf Steve Stricker Tiger Woods K.J. Choi Bill Haas Geoff Ogilvy Aaron Baddeley
Get the latest updates on IPL 2021, check out the IPL 2021 Schedule and Indian Premier League Live Score . Like us on Facebook or follow us on Twitter for more sports updates. You can also download the NDTV Cricket app for Android or iOS.