Randhawa was two shots behind the clubhouse leader Kiradech Aphinbarnrat of Thailand, who was on the first nine with six birdies between third and ninth holes. He was seven-under through 14 holes. 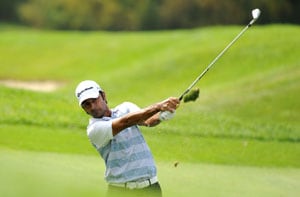 Jyoti Randhawa, who returned to the Asian Tour only last week after a gap of almost five months, showed form and rhythm as he carded a flawless five-under 67 on the opening day of the rain-hit CJ Invitational hosted by KJ Choi.

Randhawa's 67 gave him a tied third spot with a fair number of golfers yet to finish on a day when play was delayed by two hours and 30 minutes due to thick fog in the morning.

Randhawa was two shots behind the clubhouse leader Kiradech Aphinbarnrat of Thailand, who was on the first nine with six birdies between third and ninth holes. He was seven-under through 14 holes.

Randhawa began the day on back and birdied the 10th and 12th and turned in two-under. He then added birdies on third, fifth and the closing hole ninth for a 67.

Kim Tae-Hoon of Korea was second with 66, while Randhawa shared the third spot with Australian Mathew Steiger, Korean Kim Jae-Ho and Thai Gunn Charoenkul, all of whom shot 67 each.

Other Indians in the fray, Himmat Rai, struggling with form this season, was three-under 15 holes, while Anirban Lahiri was three-under 69 with four birdies and one bogey in provisional 11th place.

Gaganjeet Bhullar was treading a dangerous zone as he was even par after 13 holes and the cut looked like at par or even one-under on Friday.

Comments
Topics mentioned in this article
Golf Jyoti Randhawa
Get the latest updates on ICC T20 Worldcup 2022 and CWG 2022 check out the Schedule, Live Score and Medals Tally. Like us on Facebook or follow us on Twitter for more sports updates. You can also download the NDTV Cricket app for Android or iOS.