Jyoti Randhawa carded a one-under 71 while Rashid Khan bounced back to register a two-under 70 in the Mauritius Open. 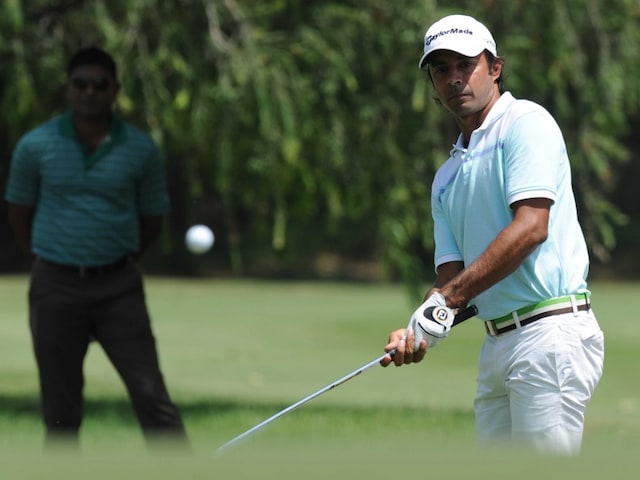 Jyoti Randhawa is currently tied-14th in the Mauritius Open while Rashid Khan bounced back.© AFP

Jyoti Randhawa carded a one-under 71 in the third round to rise up to tied 14th in the AfrAsia Bank Mauritius Open on Saturday.

Randhawa, who teed up in Japan three weeks ago for his first event since mid-December, added a one-under 71 to his rounds of 73-75 to get a total of three-over 219.

Meanwhile, Rashid Khan continued to ride his own roller-coaster as he bounced back from a crippling second round of nine-over 81 to record two-under 70 on the third day to share the 14th spot with Randhawa.

Siddikur Rahman, who for the last year or so has been playing with an injured back even as he tried to find ways to get better, found himself leading an European Tour event for the first time as he played very steady golf in the face of very windy conditions.

He had four birdies against just one bogey, while his playing partners, Andrew Dodt, who had a three-shot lead at the start, gave away six shots between 13th and 16th and Korean Wang Jeunghun dropped back-to-back bogeys on 15th and 16th.

Also making good upward moves were Rahil Gangjee, from 57th to 25th, as he carded one-under 71, while Arjun Atwal, another one at 57th moved to Tied-41st.

For Rashid, it has been a massive up and down over last three days, as he began the week with a superb four-under 68 only to bring in a card of 81 on Friday.

"I was happy to bounce back after the second round 81. Frankly, I am hitting the ball well, even yesterday I did not hit badly. I hit only one bad tee shot in second round and dropped a whole lot from the fairways. But I have put those thoughts away," said Rashid.

Randhawa, who missed the cut in Japan last month, because of lack of tournament play, looked happy to play only his second event in five months.

"I love adventure sports even though I have injured myself and broken a lot of bones - I think it must be six or seven times in last 8-10 years," he said with a laugh. "But now I am fit and playing well, as you can see."

Comments
Topics mentioned in this article
Jyoti Randhawa Rashid Khan Golf
Get the latest Cricket news, check out the India cricket schedule, Cricket live score . Like us on Facebook or follow us on Twitter for more sports updates. You can also download the NDTV Cricket app for Android or iOS.