Jordan Spieth lost his World No. 1 ranking as was eliminated from the Dell Match Play tournament. Jason Day became the top-ranked player and he will face Rory McIlroy in the semi-final, who has not lost in 12 matches.

Written by Associated Press
Read Time : 4-min
Jordan Spieth was eliminated from the Dell Match Play and he also lost his World No.1 ranking. © AFP

The Dell Match Play has produced a semifinal that is almost bigger than Texas. Even without Jordan Spieth. Jason Day powered his way to two victories Saturday to assure that he will return to No. 1 in the world. (Jordan Spieth Blames Twitter Tirade For Loss)

But this is no time to celebrate. His reward is a semifinal showdown against defending champion Rory McIlroy, who ran his unbeaten streak to 12 matches and needs two more to join Tiger Woods as the only back-to-back winners. This is only the second time the No. 2 and No. 3 seeds have met in the semifinals since the Match Play began in 1999. They are the last two winners of this event.

"I expect it to be very, very tough and very stressful out there," Day said. "And that's the stuff I enjoy."

Day and McIlroy have never met in match play.

"I've love to play Jason," McIlroy said. "I'd really relish it. He's playing really well at the minute, coming off a win last week. I'd be really up for it. It's a big match."

Spieth, who led the Texas Longhorns to an NCAA title in 2012 and had the gallery on his side all week, won't be around for all the excitement.

He lost his fourth-round match to Louis Oosthuizen, and then he lost the No. 1 ranking when Day advanced to the semifinal. Spieth was more concerned about how his swing got out of sorts than losing the No. 1 ranking.

"To be honest, it could be a good thing for me going into the Masters," he said.

Day and McIlroy were all square going to the back in their matches. Day won two of the first three holes to pull away from Brooks Koepka, closing him out on the 16th hole. McIlroy ran off four birdies in six holes for a 4-and-3 victory over Chris Kirk.

"It's been a bit of an up and down week, especially emotionally," said Day, who considered withdrawing when his back seized up on him after his first match of the week. "It's been quite amazing to be able to start the week, not really thinking I'm going to be able to play with what happened Wednesday, and then turn around and I'm No. 1 in the world. It's a strange feeling. I'm glad I stuck it out."

Oosthuizen, who eliminated Spieth with a 4-and-2 victory in the morning, took advantage of Dustin Johnson's blunders in the quarterfinals to win, 2 and 1. Rafa Cabrera Bello of Spain also advanced to the semifinals by beating Ryan Moore, 2 and 1.

Oosthuizen and Day are the only semifinalists who have yet to play the 18th hole in competition at Austin Country Club.

"I didn't make it very hard on Louis today, which is unfortunate," said Spieth, who lost holes with three bogeys and a double bogey. "I was off from when I hit my first 10 shots on the range. I've had incredible control of the ball this week and of my wedges. I'm not exactly sure what happened." 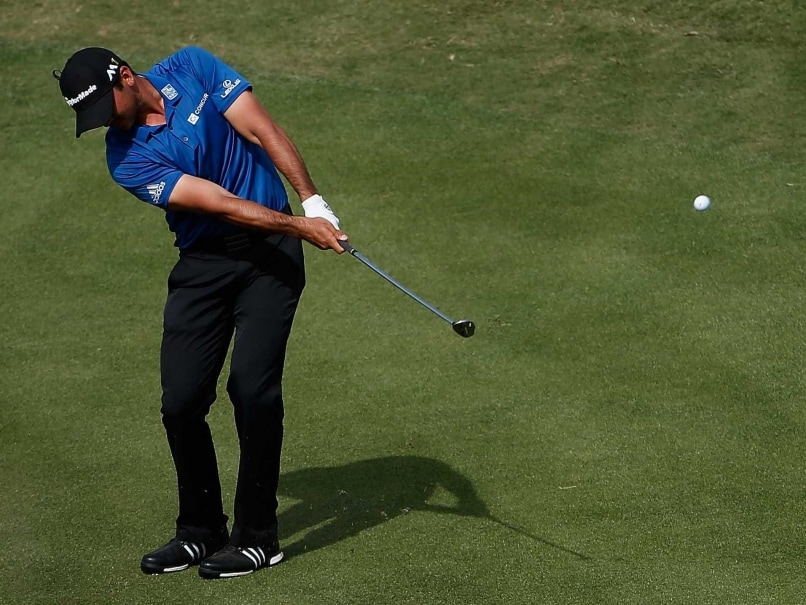 Jason Day is the new World No.1 and he will face Rory McIlroy in the semi-final of the Dell Match Play tournament.

Spieth led a trail of Americans to the airport. There were 11 Americans in the round of 16 at the start of the day, none at the end of it. This is the first time since 2010 that no Americans advanced to the semifinals.

Day has played the fewest holes this week - 69 holes over five rounds - helped by an ill Paul Casey pulling out after six holes on Thursday.

Day squared the match against Koepka on the eighth hole, pulled ahead with a birdie on No. 10 and then hit out of the bunker to about 20 feet for an eagle that was conceded to go 2 up. Koepka never won another hole.

McIlroy's toughest work came in the morning against Zach Johnson, who battled McIlroy to the very end. McIlroy was leading 1 up when he hit wedge to 3 feet on the 18th that seemingly wrapped up the match, except that Johnson made a 20-foot birdie putt and McIlroy had to roll in his birdie to win.

Oosthuizen reached the semifinals for the first time, and Johnson helped him get there.

Johnson three-putted for bogey on No. 11 to fall behind for the first time in the match. Oosthuizen went into the water on the par-5 12th, only for Johnson to follow with a shot into the water. Oosthuizen was 1 up playing the par-3 17th when he made a 20-foot birdie putt, and Johnson missed his birdie from 6 feet that would have extended the match.

"I just wanted to go through to tomorrow and see if I can get into this final," Oosthuizen said.

That might be what it takes for anyone to pay attention to him or Cabrera Bello, who picked up one important victory this week. His victory Saturday morning assured him of moving into the top 50 at the end of the week and getting into the Masters for the first time.

Comments
Topics mentioned in this article Golf Jordan Spieth Jason Day Rory McIlroy
Get the latest Indian Premier League 2020 news, check out the IPL 2020 schedule, Cricket live score . Like us on Facebook or follow us on Twitter for more IPL 2020 updates. You can also download the NDTV Cricket app for Android or iOS.
Highlights
Related Articles