Jeev Milkha Singh is hoping for a turnaround like 2014, when Asia won 7-3 in the singles and tied the match. 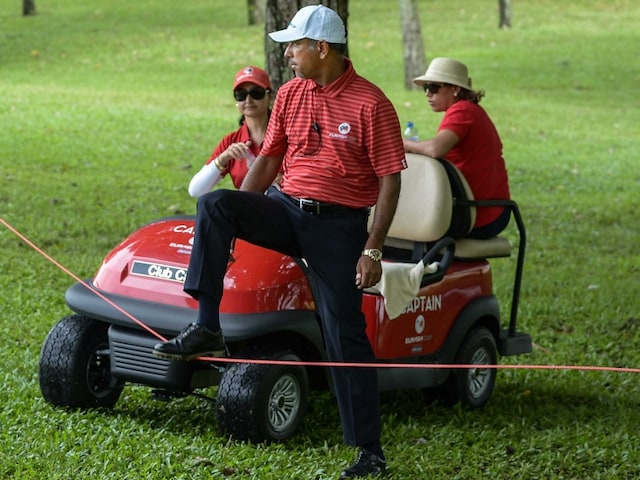 His team trails by six points but Asia captain Jeev Milkha Singh has still not give up hopes of upstaging Europe on the third and final day of the Eurasia Cup golf tournament on Sunday. (SSP Chawrasia Outshines Anirban Lahiri But Europeans Dominate Team Asia in Eurasia Cup)

After winning the first two days' fourballs and foursomes by identical margins of four-and-a-half to run up a six-point lead, Europe need only three and a half points to become the first winners of the EurAsia Cup, which two years ago was tied 10-10.

The teams will clash in 12 singles matches on Sunday.

Jeev is hoping for a turnaround like 2014, when Asia won 7-3 in the singles and tied the match.

In the singles, the shortest player five-foot-seven SSP Chawrasia will play the tallest six-foot-six Chris Wood, for the third time in as many days, while Anirban Lahiri will meet Shane Lowry.

Ian Poulter will once again go out first and he takes on local Danny Chia, who contended he is nowhere near his best game so far and Nicholas Fung will meet Lee Westwood.

"We got one-and-a-half points, and looking back two years ago, we were in a similar situation, and the boys pulled through. And I still believe with the pairings that have come out, my boys are going to do well tomorrow. I think in golf, I believe in the saying, anything is possible until the last putt is not holed out," Jeev said.

On how the day panned out, he said, "I think the start was amazing. When I saw red out there, I said the boys are going to get the thing rolling today. But that's all right. It didn't work out like that, but there is still tomorrow."

European skipper Darren Clarke was delighted with the lead, but preferred not to celebrate just yet.

"There's no hands on any trophy in any golf tournament until you finish the last hole on a Sunday afternoon. I have been in the game too long to know that, whether it's the singles or a team tournament," he said.

"Obviously, I go back to Brookline 1999 (Ryder Cup) whenever we had a big lead and lost. There's still a lot of golf to play tomorrow against a very strong Asian team.

"Today Asia got off to a very strong start; I thought they might do it. Europe rallied and things went their way on the back nine."