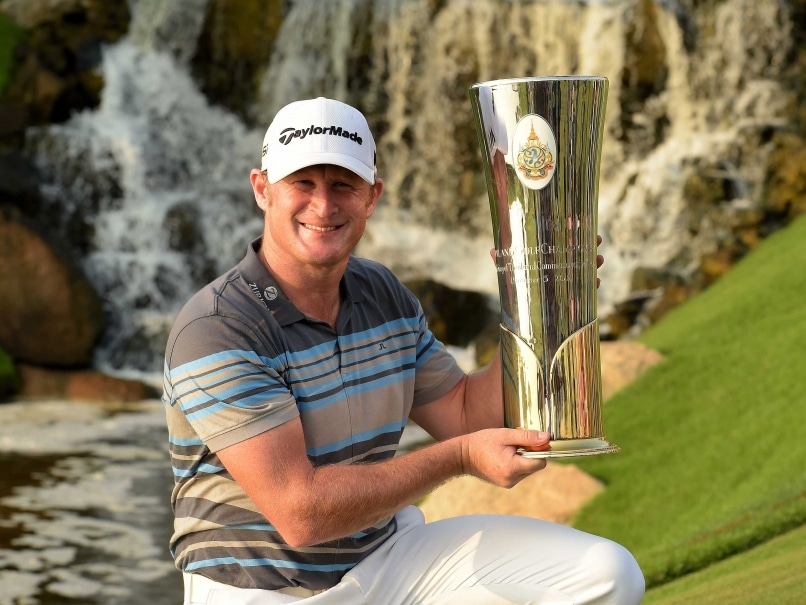 Jamie Donaldson of Wales poses with the winner's trophy after his victory in the final round of the Thailand Golf Championship at the Amata Spring Country Club in Chonburi.© AFP

Jamie Donaldson played a masterful round to hold off a spirited challenge from Lee Westwood and Clement Sordet and clinch the Thai Golf Championship in style on Sunday. (Read More in Golf)

"It feels great to win this trophy and beat some of the best players in the world," said Donaldson, who admitted he had not played that well this year.

"It all came together today, even though it was bit of a battle with the heat."

Donaldson's victory also meant he qualified for the 2016 Open Championship at Royal Troon, as did Westwood.

Also earning a trip to Troon were Sordet and the 16 year-old Thai, Phachara Khongwatmai, who soared up the leaderboard to clinch sole sixth place after shooting 66.

In joint fourth place, four shots back from the runners-up, were Spain's Sergio Garcia and South Korea's An Byeong-Hun, who had already earned exemptions to the Open.

Opening up with three straight birdies, Donaldson quickly powered past overnight leader Sordet. The Welshman appeared to be in charge, but he had not totally shaken off his two playing partners who were right on his heels.

A key moment came at the 16th, when Westwood and Sordet both sank birdies while Donaldson suffered his second bogey of the round. It looked like it was game on.

"Suddenly I had gone from being comfortable to only having a one-shot lead," said Donaldson.

But a fine birdie at 17, the famous island green, restored calm and the Welshman coasted in on the 18th, stretching his lead to three strokes.

"I was really relieved when I hit the green at 17," he said. "Then I sunk a great putt and I felt a lot better."

Westwood admitted he was disappointed he could not pull off a hat-trick of wins at the Amata Spring Course, but was extremely happy to qualify for the Open next year.

"That will be my 21st consecutive Open," he said. "It's really great for me to keep it going. I like Royal Troon and I hope to put in a good performance."

Sordet shrugged off missing out on the Thailand trophy, saying he was still quite pleased with his performance. But he was excited at the prospect of playing in the Open.

"I didn't expect it at all. It will be great playing with the best players in the world. I'll just try to do my best."

Thailand's Phachara felt much the same. "When I entered this event I didn't even consider the possibility of playing in the Open at Troon," he said.

"I feel really honoured to have this opportunity. I had better start practicing."

Comments
Topics mentioned in this article
Jamie Donaldson Lee Westwood Sergio Garcia Golf
Get the latest updates on IPL 2020, check out the IPL Schedule for 2020 and Indian Premier League (IPL) Cricket live score . Like us on Facebook or follow us on Twitter for more sports updates. You can also download the NDTV Cricket app for Android or iOS.