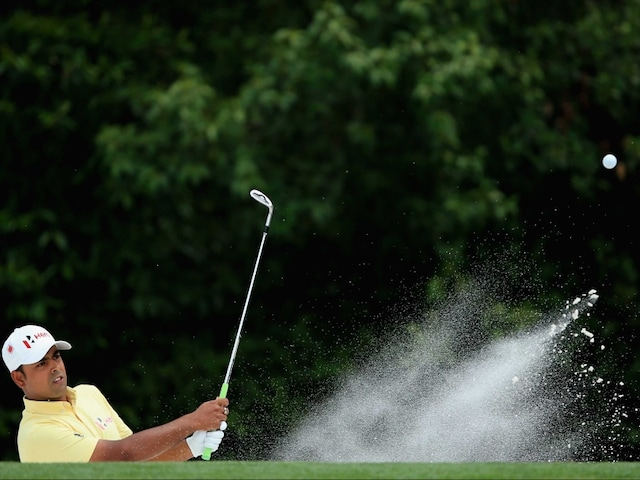 Anirban Lahiri has been called an "asset" to the team for Presidents Cup.© AFP
Incheon:

Anirban Lahiri's presence in the International team and his newly-earned PGA Tour card has attracted a lot of attention this week in Presidents Cup.

Even as the International team captain lauded Lahiri and called him an "asset" to the team, two other testimonials for Indian golf came from Jack Nicklaus, the greatest player the game has seen, and Tim Finchem, the Commissioner of PGA Tour, and quite easily the most influential official in world golf.

Nicklaus, whose 18 Majors is still the ultimate benchmark in Professional golf, and whose name this week's President's Cup venue, the Jack Nicklaus Golf and Country Club, carries is quite gung-ho about golf in India.

Nicklaus, now 75, who is continuing his association with the game through golf course design and other business, has had his name attached to more than 325 golf courses around the world.

"The biggest problem in India is you have a lot of population and not much land. You try to put a piece of ground together and do a golf course in India, you know you have several hundred owners, landowners; so you're trying to put a piece together and that makes it very difficult. But I think golf will grow and continue to grow in their country."

The PGA Tour Commissioner, Finchem, addressing the question said, "We're delighted that there's a player from India, who happens to be a very engaging fella, and we look forward to working with entities in India going forward as golf develops there and companies that are interested around the globe."

He also said, "It's a developing relationship. We have some activity. We are delighted with the interest that there is by Indian companies and PGA TOUR golf and golf generally. We can only do so much to relate to that interest, but now, Indian companies are showing more interest in the market of the United States."

"So we see it as certainly (good); if you go back 15 years, nobody ever came to see us from India. Now they come and talk about golf course development, housing development and also companies that are interested in global markets."

Talking about other parts of Asia, Nicklaus added, "I think that golf developed first in Asia more in Japan and Korea than other places. China is developing, but it's a slow process in China. China has probably got 700 or 800 golf courses now."

As a company, I think we have got about five courses we are doing in Vietnam right now. We've got down through Asia, well, actually, Thailand, I did maybe seven golf courses there about 20 years ago.

"I think the game of golf is going to continue to grow in Asia. It goes through cycles and periods where it goes up-and-down, and some places become very excited about wanting golf and then all of a sudden they sort of slow down and another area pops up.

Finchem added, "It's just another indication of how golf is growing. It's also a recognition that we live in a global economy. Everything is interconnected. And it does beg the question about whether golf on a professional level should be organised more in a global fashion to take advantage of those synergies and those dynamics that are changing globally. So we spend more and more time thinking about those things."

Comments
Topics mentioned in this article
Jack Nicklaus Anirban Lahiri Golf
Get the latest Cricket news, check out the India cricket schedule, Cricket live score . Like us on Facebook or follow us on Twitter for more sports updates. You can also download the NDTV Cricket app for Android or iOS.