Not to be outdone, Matt Kuchar reached the semifinals for the second time in three years with steady play, rarely taking himself out of position. 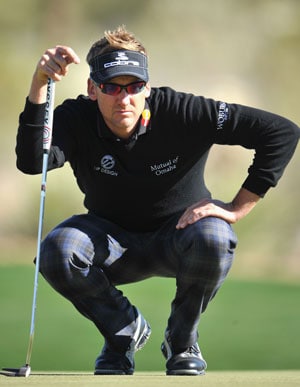 Now he gets to find out for himself.

Poulter again proved to be one tough customer Saturday when he beat Steve Stricker with one big putt after another, advancing to the semifinals and improving his record in match play around the world to 19-3-2 over the last four years.

Next up is Mahan, who is leaving his own mark at Dove Mountain. Mahan outlasted U.S. Open champion Webb Simpson in 18 holes, leaving him two wins away from joining Tiger Woods as the only repeat winners of this World Golf Championship. Not only has Mahan won every match he has played - 11 in a row - over the last two years, he now has gone 151 consecutive holes at the Match Play Championship without trailing.

Poulter is aiming for his second Match Play win in the last four years.

"I have so much respect for the guy and how he plays," Mahan said. "There's not one part of his game that really shines. He has a great short game and he's a great putter, but to me, his determination and his will is his greatest strength. He's never going to think he's out of a hole."

Not to be outdone, Matt Kuchar reached the semifinals for the second time in three years with steady play, rarely taking himself out of position. That proved way too much for Robert Garrigus, who was 4 down through 10 holes and didn't make it beyond the 16th green.

Kuchar will play Jason Day of Australia, who won a tight match against Graeme McDowell in 18 holes.

The biggest stars in golf might be long gone. In their place are two guys who might be the best in match play over the last few years.

That much is becoming abundantly clear. After he pulled away from Tim Clark of South Africa in the third round Saturday morning, he faced his toughest challenge yet in Stricker, who started his 46th birthday celebration by making eight birdies in a brilliantly played match against Scott Piercy in the third round.

Stricker holed a 30-foot putt on the final hole for the win, and then ran into someone who putted even better.

The match effectively turned on the third hole. After they traded birdies, Stricker stuffed his tee shot into 6 feet, while Poulter pulled his shot some 40 feet away above the ridge. Poulter wound up making the putt, and all Stricker could do was laugh. He missed his short birdie, and the momentum shifted for good.

Describing the big moment, it wasn't clear if Poulter was talking about his putt or driving through a roundabout in England.

"It was 40 feet, left-to-right, right-to-left, right-to-left again, hopefully slowing down on the ridge, taking a left-hand turn, down the slope and then chucking a little left to right at the end to drop it," Poulter said. "It was really nice."

Stricker didn't win another hole until he was 3 down at the turn, and while he made birdie on the 10th to pick up a little momentum, he gave it right back with a tee shot into the desert on the par-5 11th, leading to a bogey. Poulter won the next with a 20-foot birdie putt, and from there it was a matter of time.

Poulter was 3 up with three holes remaining when he missed the green to the right. Stricker came up short and chipped to about 3 feet. As Poulter was studying his chip, a fan near Poulter said, "Pick it up," and Stricker did just that.

"I think it was close enough, anyway, but for a split second, it was a little off-putting," Poulter said. "And I guess I had to hole a 12-footer to finish the match."

That he did, and now plays the defending champion.

Mahan hasn't lost any match around the world since Martin Kaymer beat him in the third round at Dove Mountain in 2011. He exacted a small piece of revenge by beating Kaymer in the third round. Mahan had to play only 43 holes to reach the quarterfinals.

But his match against Simpson was tough from the start, and it was the first time Mahan played the 18th hole in competition since his opening match a year ago.

Neither player led by more than one hole, and Mahan took the lead for good on the par-3 16th when Simpson missed a 10-foot par putt. Mahan had to make a 7-foot par putt on the 16th for his par and the lead, and the finished with pars.

Day fell two holes behind immediately against McDowell, and the turning point might have been the seventh. McDowell had a tough chip behind the green that he moved only a few inches and wound up making bogey. Day holed a 6-footer for par to square the match, and it was a see-saw match the rest of the way.

In the gallery with McDowell was Shane Lowry, the No. 64 seed to eliminated Rory McIlroy in the opening round. McDowell made three birdies in a five-hole stretch at the turn to build a comfortable lead and went on to win, 3 and 2.

His putter let him down against Day, however. He missed a 10-foot par putt on the 17th that gave Day the lead, and then missed a 15-foot putt from just off the green that would have extended the match.

Day became the first Australian to reach the semifinals since Geoff Ogilvy won in 2009, and it took a lot to get there. He beat the Masters champion (Bubba Watson) and a former U.S. Open champion (McDowell) on the same day.

"It's like playing on Sunday every day here," Day said.

He faces Kuchar, who lost to the eventual champion each of the last two years. Garrigus had said earlier in the week that he looked at his bracket and figured didn't see anyone he couldn't beat. He must have overlooked Kuchar, who birdied the ninth for a 3-up lead and never let Garrigus get close.

Given the nature of 18 holes of match play, and the fine line of talent in golf at the highest level, the seeds don't mean much in this tournament. Poulter and Mahan have shown that to be the case.

Comments
Topics mentioned in this article
Golf Arjun Atwal Luke Donald Bill Haas Ian Poulter Louis Oosthuizen Rory McIlroy Hunter Mahan Tiger Woods
Get the latest updates on IPL 2021, check out the IPL 2021 Schedule and Indian Premier League Live Score . Like us on Facebook or follow us on Twitter for more sports updates. You can also download the NDTV Cricket app for Android or iOS.