Himmat Rai, who carded 72 and 69 in the first two rounds respectively, has a three-day total of eight-under 208 -- 12 strokes behind leader Kiradech Aphibarnrat of Thailand. 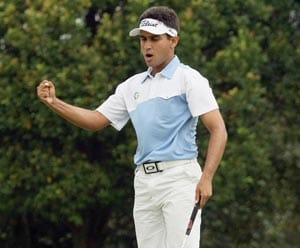 India's Himmat Rai scored five-under 67 to take the 13th position after the third round of the Thongchai Jaidee Foundation golf tournament at the Black Mountain Golf Club here on Saturday.

Himmat, who carded 72 and 69 in the first two rounds respectively, has a three-day total of eight-under 208 -- 12 strokes behind leader Kiradech Aphibarnrat of Thailand.

The 28-year-old Delhi golfer scored birdies on the first, second, seventh, eighth, 14th, 16th and 17th holes. He also got a double-bogey on the par-three 11th.

Himmat's compatriot, Chiragh Kumar went through a poor round of four-over 76 that took his total to two-under 214 after the penultimate round of the four million baht (approximately $111,808) Asian Development Tour (ADT) event.

Hometown hero Prom Meesawat sits a further shot back in the fourth place following a 71, while Pariya Junhasavasdikul, also of Thailand, settled for fifth place on 203.

Comments
Topics mentioned in this article Golf
Get the latest Indian Premier League 2020 news, check out the IPL 2020 schedule, Cricket live score . Like us on Facebook or follow us on Twitter for more IPL 2020 updates. You can also download the NDTV Cricket app for Android or iOS.
Related Articles