Hideki Matsuyama, who had birdied the final hole of regulation to force the playoff with Kevin Na, won at the first playoff hole with a 10-foot par putt.

Japan's Hideki Matsuyama cemented his status as one of golf's rising stars on Sunday, winning his first US PGA Tour title in a playoff at the Memorial. 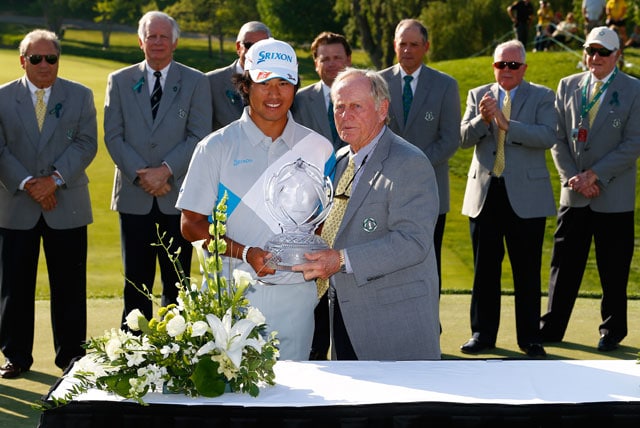 Matsuyama, who had birdied the final hole of regulation to force the playoff with Kevin Na, won at the first playoff hole with a 10-foot par putt.

The 22-year-old Asian star became the fourth Japanese player to win on the US PGA Tour, notching the victory in just his 26th start.

His triumph capped a wild final day that saw overnight leader Bubba Watson, the reigning Masters champion, drop out of contention after a bogey at 14 followed by a double-bogey seven at the par-five 15th at Muirfield Village.

Matsuyama's own hopes looked dim after a double-bogey at the par-three 16th and bogey at 17.

He looked to be in trouble again after a poor tee shot at the last but finished with a birdie that capped a three-under par 69 for 13-under 275.

He forced the playoff with South Korea-born American Na, who had been in the clubhouse for some two hours having completed a bogey-free eight-under par 64 for 275.

They returned to 18 for the playoff, and Na was in a stream off the tee.

Matsuyama was in a bunker off the tee and hit into the gallery from there. But he came up with a beautiful flop shot and drained a 10-foot putt for par to seal the victory.

Matsuyama, who won four times on the Japan Tour last year, joined Isao Aoki, Ryuji Imada and Shigeki Maruyama as the only Japanese players to win on the US PGA Tour.

"Really, really happy," he said after the win, adding that he was honored to win a tournament hosted by US great Nicklaus.

"It's a dream come true to win at Mr. Nicklaus' course," he said.

Watson missed out on the playoff by a stroke. He finished alone in third after an even par 72 for 276.

Na at least had the consolation of earning an exemption for the US Open, so he won't have to play a qualifier as planned.

He was among a group of players who started the day seven shots adrift, and said he was inspired on Saturday night when he heard Nicklaus tell a television interviewer he thought those players were in the hunt.

"I thought 'Really?'" Na said. "It was a battle, but I thought I did very well. It's a hard golf course. I know the guys are tearing it up, but we all know it's not easy."

Watson wasn't the only big name to prove that.

World number one Adam Scott of Australia had briefly grabbed a share of the lead after a birdie at the 11th.

But he was in the water at 12 en route to a double-bogey and ended up with a share of fourth on 278 alongside American Chris Kirk, who carded a 68.