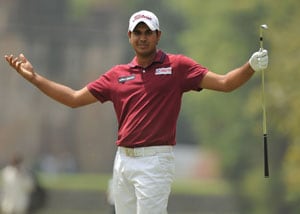 Buoyed by the Arjuna award conferred on him this year, rising Indian golfer Gaganjeet Bhullar is determined to pull off a repeat victory at the Yeangder Tournament Players Championship next week.

The talented Indian received a huge confidence boost ahead of his campaign for the second half of the Asian Tour season when he received the Arjuna award from the President of India, Pranab Mukherjee last week.

"It is exciting and a great achievement to be able to receive the Arjuna Award at such a young age. I'm very proud," said the 25-year-old Bhullar, who joined fellow Indian golfers Jeev Milkha Singh, Shiv Kapur, Jyoti Randhawa and Arjun Atwal as recipients of the award.

With his confidence boosted, Bhullar will now aim for a successful title defence at the USD 500,000 Yeangder TPC at the Linkou International Golf and Country Club from September 12 to 15.

His victory at the Yeangder TPC 12 months ago sparked a sensational run of form on the Asian Tour where he went on to win the Venetian Macau Open for his second title in 2012. He ended the year fifth on the Order of Merit for his career's best finish so far.

"The Yeangder TPC was a tournament that gave me a lot of confidence. Before that, I was giving it 100 per cent but the results were not showing. That week, I realised my game was coming back and I just needed to get into contention and get a victory under my belt, which I did," said Bhullar.

"I was hitting the ball so good that week and I played well on the par fives. I was very focussed, calm and relaxed. I just told myself to give it whatever I could and not hold back," he added.

Bhullar, currently second on the Order of Merit, has been working hard on his fitness during the Asian Tour's summer break. He hopes the extra training will push him towards more success on the region's premier Tour which is celebrating its milestone 10th season this year.

"I play in so many tournaments, so whenever I get the opportunity I will try to improve my fitness. Fitness is one of the reasons to staying healthy and injury free. These are the few points which I worked on during the break," he said.

"After a successful season in 2012, you set yourself more goals and expectations. It is not pressure but more motivation. People are expecting more from you but we work hard on and off the Tour. Success is definitely something we aim for."

The Yeangder TPC will see a reunion between Bhullar and Lu Wei-chih, the 2011 Yeangder TPC champion, who returns to action on the Asian Tour after taking a year's sabbatical to recover from a brain tumour surgery.

"It was quite an emotional moment (after finding out about Lu). I met him last year and he said he was feeling good. He is a close friend and I've played with him a few times. I'm glad he is back on Tour and I'm sure it won't take him long to be winning tournaments again," said Bhullar.

Lu Wen-teh, Lin Wen-tang, who won the Solaire Open in the Philippines in April, two-time Asian Tour winners Chan Yih-shin and Tsai Chi-huang, and highly-rated Hung Chien-yao will spearhead the local challenge at the Yeangder TPC.