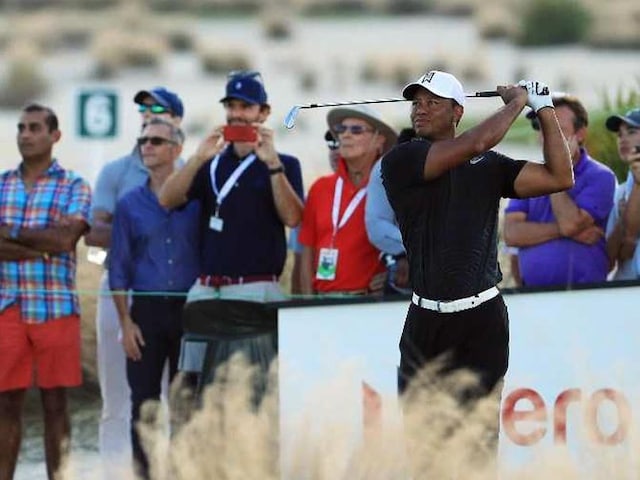 Tiger Woods in action at the Hero World Challenge at Albany, Bahamas.© AFP

Tommy Fleetwood was fully focussed on the golf despite his wedding next week as he took the lead in the Hero World Challenge with a six-under 66 on the opening day that also saw Tiger Woods make a promising return to the sport. While all eyes were on Woods, Fleetwood quietly went about his business to make a strong start in the tournament. A shot behind the Englishman were Matt Kuchar and Rickie Fowler of the United States. Woods, playing his first competitive round since February, was within one shot of the lead before finishing with a three-under 69 to be at tied-8th.

Earlier in the week, the 41-year-old said that his back was finally pain-free but it remains to be seen how his body holds up over four days of high-pressure golf.

The five-time Hero Challenge winner had some trouble finding fairways as he found only seven of the 13 fairways but he did reach 12 greens out of the 18. He needed 28 putts, but must have rued two messed up chips and a handful of missed half chances on the green.

"Up and down because I had a lot of birdies, made a lot of putts. I didn't play the par 5s very well, made two 6s and I grinded it out and made a few pars, which is nice," he said.

On his comeback, Woods added: "It was not only nice to get the first round out of the way, but also I'm only three shots out of the lead. So to be able to put myself there after not playing for -- is it 10 months or so, in the neighbourhood of that -- it was nice to feel the adrenaline out there.

"I had to dial it back a little bit with my clubs, take it a little bit further because obviously I was a little jacked up. The shot that I hit over there at 14 was pretty sweet, a little 95-yard pitching wedge. If I would have had that same shot early in the round, I couldn't have played it because I had not figured out how to dial it back yet."

Fleetwood, on the other hand, was bogey free and displayed stellar form which has carried him through as many six countries in last 10 weeks and yielded a bunch of Top-10 finishes and the Race to Dubai honours. He was near-perfect as he found 15 of the 18 greens, 10 of the 13 fairways and needed 28 putts on a day, which was partly cloudy and breezy.

Besides Fleetwood, Kuchar and Dustin Johnson (68) were the only players to go bogey free.

"I played really well, got off to a nice start. The first five holes I hit a lot of good shots and felt like I had a good rhythm and a couple birdies early on. The front nine, 4-under on the front nine is a good start to the day," said Fleetwood.

On getting married next week, he added: "Well, Clare's in charge and she has picked out the venue, so it's like ceremony, then dinner and then party at our villa. Yeah, I'll make sure I know come Tuesday morning where I'm going. We're not going to see each other Monday night."

Defending champion Hideki Matsuyama (T-14) turned in a 1 -under 71, which included four consecutive birdies from 14th to 17th holes.

Comments
Topics mentioned in this article
Tiger Woods Tommy Fleetwood Golf
Get the latest Cricket news, check out the India cricket schedule, Cricket live score . Like us on Facebook or follow us on Twitter for more sports updates. You can also download the NDTV Cricket app for Android or iOS.