Daly puts Down Under episode behind him

John Daly said on Tuesday he had heard no more from the Australian golf authorities over an incident in which he stormed out of a tournament last month after hitting six shots in a lake. 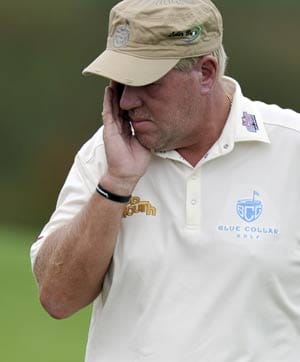 John Daly said on Tuesday he had heard no more from the Australian golf authorities over an incident in which he stormed out of a tournament last month after hitting six shots in a lake.

"I haven't really talked to anybody and they haven't talked to me," said the fiery American, whose history of blow-ups has earned him the nickname "Wild Thing".

Asked if he thought the issue had been resolved, he would only say, "I guess."

Daly walked off the course at the Australian Open at the 11th hole in the opening round -- prompting an accusation from championship director Trevor Herden of "unprofessional" conduct.

The PGA of Australia said soon afterwards that it would refer the incident to its disciplinary committee.

The colourful star, who has a history of pulling out during tournaments, is in Bangkok to compete in the inaugural $1 million Thailand Golf Championship, which tees off on Thursday.

Daly was more keen on talking about his promising performance recently at the Hong Kong Open than his past brushes with controversy.

"I played well in Hong Kong. It's weird, I am hitting the ball well but just not scoring. It's a little bit frustrating."

He said he would continue to work on his game. "If I could put it all together it would be great."

Daly, who has been a member of the European Tour for two years, said he planned to play in Europe more often.

"I need to play competitive golf. I think it's great what the Europeans have done, being number one and fighting. It has given golf a little bit more focus."

Despite the withdrawal of US Open champion Rory McIlroy because of illness, the Thai tournament has attracted a host of big names including British Open winner Darren Clarke and Masters champion Charl Schwartzel from South Africa.

Daly was full of praise for the Amata Spring Country Club course near Bangkok where the tournament is being held.

Agreeing with him about the course was promising Thai player Chapchai Nirat. "The greens are very challenging," said Chapchai.

He admitted it gave him extra motivation playing with such stars as Daly, Clarke and World number three Lee Westwood of England.

"I am proud Thailand is hosting the tournament with such fine players," he said. "It will help inspire Thailand's young golfers."

Comments
Topics mentioned in this article
Golf Tennis Rory McIlroy Jeev Milkha Singh John Daly
Get the latest Cricket news, check out the India cricket schedule, Cricket live score . Like us on Facebook or follow us on Twitter for more sports updates. You can also download the NDTV Cricket app for Android or iOS.