Colsaerts powers back into contention

Long-hitting Belgian Nicolas Colsaerts powered his way back into contention with a four- under-par 69 in the third round of the Volvo Golf Champions tournament at The Links at Fancourt on Saturday. 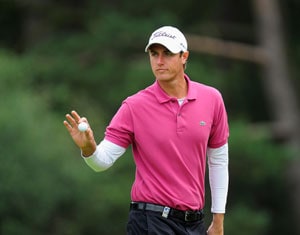 Long-hitting Belgian Nicolas Colsaerts powered his way back into contention with a four- under-par 69 in the third round of the Volvo Golf Champions tournament at The Links at Fancourt on Saturday.

Colsaerts was tied for the lead with second round leader Branden Grace on ten-under-par 209 at the end of a day when scoring soared in rain and gusting wind. Local resident Grace relinquished a four-stroke lead and struggled to a two-over 75 on what he admitted was "a long day".

Masters champion Schwartzel shot a best-of-the-day 68. Spanish veteran Jose Maria Olazabal was one of only ten players to beat the par of 73, shooting 72 to be alone in fifth place despite a double bogey five on the par-three 17th.

Former British Open champions Padraig Harrington and Louis Oosthuizen were three off the pace, with Ernie Els another stroke back.

Colsaerts, who followed a course record 64 in the first round before slumping to a 76 on Friday, said: "I was really glad that I put another good round together today after yesterday. It's always difficult when you play that good on a course like this and nothing goes according to plan."

The highlight of Colsaert's round was an eagle on the downwind 502- metre par-five 18th. After what he described as "an enormous drive" he was left with an eight-iron into the green.

Conditions were much more difficult than on the first two days, although the rain ceased when the leading players were midway through their rounds.

Schwartzel said the tougher conditions favoured South African players who were familiar with The Links.

"I said at the beginning of the week that it is a golf course you need to know well. The first two days were pretty easy but just change the weather around a little bit and it becomes a completely different golf course."

Schwartzel needed physiotherapy before his round because of pain in his right elbow. "I hit maybe ten balls on the range. It was just the nerve that was a bit tight. So I ran into the physio just before I teed off. I never felt it on the golf course."

While other players struggled, Schwartzel hit "flawless shot after flawless shot" and said he hoped conditions would be tricky again on Sunday. "The tougher it gets the better," he said.

Goosen also relished the more difficult conditions but said he was disappointed he had failed to take advantage of the par-five 16th and 18th, both playing downwind.

Double, triple and even quadruple bogeys were commonplace, especially early in the day. Spain's Pablo Martin ballooned to a 17-over-par 90, which included a quadruple bogey eight on the 10th, a triple bogey seven on the 14th and four double bogeys.

England's Lee Slattery, who started the day in joint second place, made a horror start, losing a ball when his first tee shot disappeared in deep rough, leading to a triple bogey seven, which he followed with a double bogey six at the third. He finished with a 77 to be six off the pace.

Playing partner Grace also started shakily, dropping three shots over the first seven holes before recovering with birdies on the ninth and 11th. He had four birdies on the back nine which were offset by two double bogeys.

Comments
Topics mentioned in this article
Golf Nicolas Colsaerts
Get the latest Cricket news, check out the India cricket schedule, Cricket live score . Like us on Facebook or follow us on Twitter for more sports updates. You can also download the NDTV Cricket app for Android or iOS.